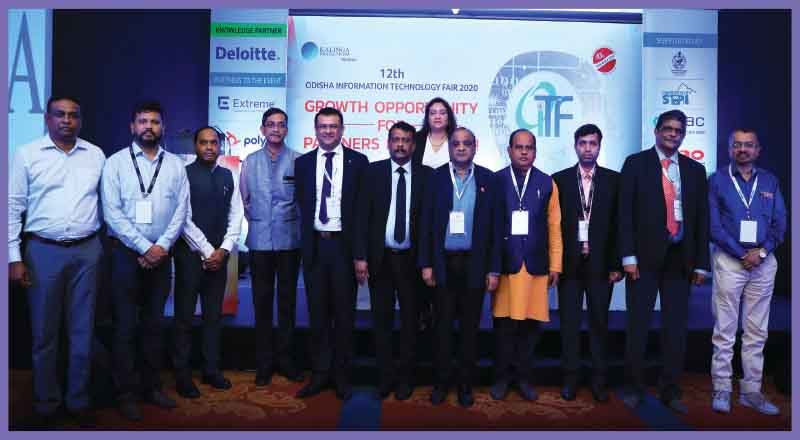 The 12th edition of the Odisha Information Technology Fair (OITF 2020), held in the capital city of Bhubaneswar, Odisha witnessed the coming together of a host of luminaries from the IT industry to discuss the issues pertaining to the state. The invitees to the event included IT & Telecom honchos, senior Government officials, industry leaders, VARs and SIs. With every passing year, the status and grandeur of the event has been gaining more and more popularity. VARINDIA OITF has played the role of a catalyst in forging some of the historic partnerships in the state of Odisha and initiating ground breaking thoughts towards the development of the nation. The knowledge partner of the event was DELOITTE.

The first address of the evening was given by Dr Deepak Kumar Sahu, President & CEO, VARINDIA, and he touched upon the fact that India continues to spend the most time in mobile each day and that consumers are spending 35% more time in mobile in 2019 than 2 years prior. “Mobile-focused companies had a combined $544B valuation, 6.5x higher versus companies without a mobile focus. These are further indications that mobile is essential to succeeding with customers in 2020 and beyond. 98% of Gen Z (born 1997 – 2012) report owning a smartphone. Gen Z is expected to surpass Millennials as the largest generation by the end of 2019, comprising roughly 32% of the population. It is imperative to win Gen Z on mobile, or risk missing out on a mobile-native generation of consumers.”

The evening then progressed with government officials, as well as top industry executives present speaking on topics concerning technology in the state. Digvijaysinh Chudasama, Director- Risk Advisory- Deloitte enlightened the guests on the newer trends in the current cyber security landscape in India, while Manoj Kumar Pattnaik, CEO- OCAC, Govt. of Odisha spoke on the opportunities of investment in Odisha.

Dr. Gopal Krishna Nayak, Director-IIIT took to the stage and spoke at length about how IIIT can bring big opportunities for the partner ecosystem in the state.

In the Corporate session, corporates Extreme Networks and Beyond Security presented their insights on how technology can be implemented to make the city Smart and livable. Narayan Bagwe, Security Architech- Extreme Networks gave his vision on how the company views the state from an opportunity perspective. Uday Bhanu Das, CEO from Beyond Security spoke on how his company is committed to bringing the state-of-art technology with secure and scalable storage technology for the state of Odisha.

While Quest Global emerged as the Runner-up, the Champions of the 10th VARINDIA IT Cup Cricket Tournament was BPO Convergence.

As a special attraction of the event, an e-Motorcycle (bike) was presented by Usha Communications & Enterprises, a Maharashtra based automobile manufacturers company to the Man of the Tournament, which went to Sunil of BPO Convergence.

The hope on the part of a business is their wish to become more transparent, efficient, productive and create new opportunities. In government and other sectors, we are relying on this hope part by which we will be able to serve our customers better at a lower cost and more efficiently. There is a lot of push for providing efficient service, which is kind of unheard of a few years ago. That is the kind of responsiveness you see and people are so excited about it.”

“When we look at the IT department, our focus is on three things – strengthening e-governance, strengthening the IT infrastructure in the state, and pushing IT investment. For strengthening e-governance, our focus is on 5 T – and one of the T is ‘Technology’. In all the departments, this T is followed and 2 percent of their budget is spent on technology. So you can see the future for you. I am here to sell the state for investment but at a personal level, I am informing you about the IT scenario in the state. For strengthening the IT infrastructure, we are expanding our datacenter, expanding our state-wide network, creating a security center and besides these there are a lot of other things in the pipeline. I hope the IT partners who are present at this event will participate in it. We are also open to new ideas of how to introduce a new IT infrastructure in the state.”

“We established in 2003 in India with one lab in Chennai with around 200+ employees. From there we moved to Bangalore and added two more labs for R&D. From rank 13 in the last 16 years, Extreme Networks has grown to the rank of 3 today in India. In terms of IT infrastructure, smart city, surveillance, e-governance, there are so many things that come to mind when it comes to designing the infrastructure. So if I look at Extreme as a brand and solution, we had acquired three major brands and we integrated their technology and the brands with our solution so well that in case if our customer has to integrate it with the old legacy infrastructure and the upcoming trends it will be very convenient for them. From rank 13 to 3 was not an easy journey but we had been successful in delivering services to our customers.”

The invitees to the event included IT & Telecom honchos, senior Government officials, industry leaders, VARs and SIs. With every passing year, the status and grandeur of the event has been gaining more and more popularity. VARINDIA OITF has played the role of a catalyst in forging some of the historic partnerships in the state of Odisha and initiating ground breaking thoughts towards the development of the nation. The knowledge partner of the event was DELOITTE.

“Beyond Security has been originally a technical company. If we talk about technology – it has two sides to it, threat and opportunity. So if I take a sub 5K phone today with VoLTE connection, the common man gets the opportunity to interact with the government for anything and everything. At the same time, we as citizens have to think two things – what about accountability? Who is going to take accountability for securing these kinds of small devices for a common man who has no idea about digital technology? QR code has become very popular post digitization and it is good that we are slowly moving from a physical economy to a digital economy. But if we look at its prospective, there is danger lurking. It is dangerous as there is no accountability. You go and scan the QR code and make the payment, but you don’t know where the payment is going.”

“This is the fourth year that I have engaged with Odisha projects and it is my privilege to ensure that I continue to focus on this state. We want to make this city IT-enabled as fast as possible and bring in all the possibilities that are possible for making it the best city to live in. It is impossible to hack the mind of a person and that is the biggest challenge that the entire globe is going through. We saw a few days back a senior police officer escorting a group of social elements in J&K and it is very difficult to understand what has motivated him to accompany such kind of elements. You must have heard about People, Process and Technology. This we have been hearing from many years in whatever we do in ICT. I want to reverse this terminology and make it Technology, Process and People.” 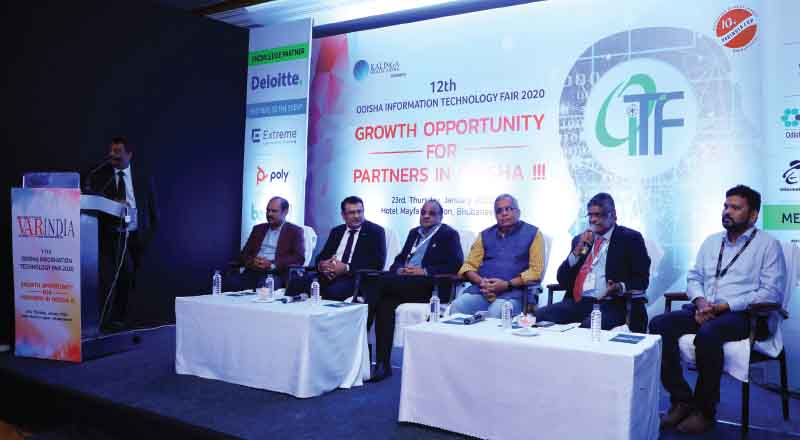 Growth strategy with innovation methods will identify and pursue opportunities for growth in the state of Odisha. Partners have the scope to bring innovation, intelligence and deep industry experience together with leading technologies to help reinvent the business as an intelligent enterprise to scale, across your organization. On this backdrop the panel discussion on ‘Growth Opportunities for Partners in Odisha’ was conducted.

Sandeep Panda, CEO – Instasafe said that never before has there been a time when partners globally can be seen sharing the same pedestal in terms of opportunities. This was not there some 15 years back.

Arun Kumar Rath, Ex-CEO, Bhilai Steel Plant said that the company is in the process of driving business acceleration for start-ups. “I have been in the field of steel for last 35-36 years, but I want to participate in the growth of Odisha. So we are trying to build a business accelerator along with NALCO and Department of Science & Technology and NIT, Rourkela.”

Dr. Gopal Krishna Nayak, Director – IIIT said that traditionally the Odisha culture is risk averse. “We would rather love to take a job with a steady stream of income than going into the world of risky business where failure is more likely than success. But fortunately I see today many Odisha youths behind the rise of start-ups.”

Manas Ranjan Pattnaik, Chairman – Anthem Global Technology Service remarked that things are changing really fast today. “Today we are witnessing a lot of registered start-ups coming up and the government is doing a very good job in this regard. But my concern is for the companies that started 10-15 years back and they now need a lot of support and assistance from the government.”

Digvijaysinh Chudasama, Director – Risk Advisory – Deloitte said that he has been attached to the state of Odisha for last four years and reiterated that the kind of development and decision making that is happening is definitely ahead of most of the states that he is currently working with. “When you look at from the opportunity perspective for partners, it is generating a lot of value – both for the organizations that they are part of and the citizens of the state.”

Dhirendra Khandelwal, M.D. – E-Square Systems said that he has been running a traditional system integration company where they move some products and do some value addition for the last 15-17 years in the state of Odisha. “But now we see a lot of areas where we can disrupt the existing business model and create more value for the citizens of the state. We chose some areas like proactive healthcare and we try to create a platform where we bring in some information for the people who visit hospitals on a regular basis.”