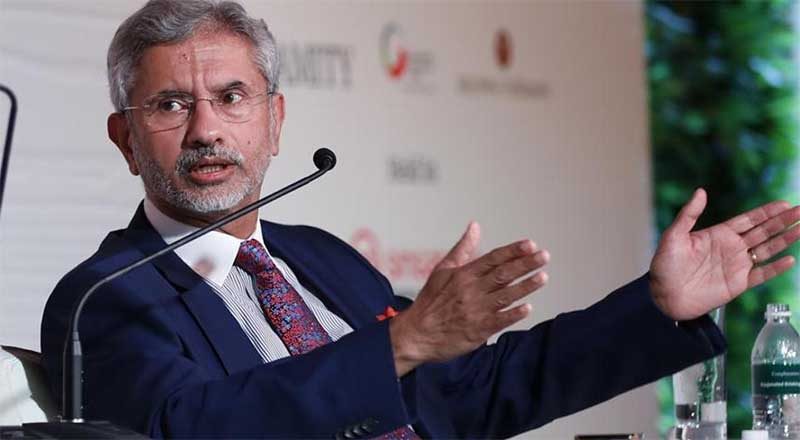 External Affairs Minister S. Jaishankar made the remarks in reply to a question after his major foreign policy speech at the Centre for Strategic and International Studies, a top American think-tank.

Once India triggers development in Jammu and Kashmir, all of Pakistan’s plan for the last 70 years against the state would come to a naught, External Affairs Minister S. Jaishankar told a top U.S. think-tank in Washington.

The Minister also pointed out to the Washington audience that the current suspension of the mobile network in the Kashmir valley is aimed at preventing the misuse of internet and social media for radicalising and mobilising anti-Indian forces and to ensure that no loss of life occurs during the transition to the development phase.

Mr. Jaishankar made the remarks in reply to a question after his major foreign policy speech at the Centre for Strategic and International Studies, a top American think-tank.

“[But], if we actually manage to get development going in Jammu and Kashmir, do understand, that everything that the Pakistanis have planned for the last 70 years comes to naught,” he added.

The External Affairs Minister sounded similar to what Jammu and Kashmir Governor Satya Pal Malik had said last month. “If we are able to take Jammu and Kashmir to the path of development, which is very much possible, the day is not far when the PoK residents, facing worst situation under the occupation of Pakistan, will race towards us on their own to be part of India,” Mr. Malik had said, taking a dig at Pakistan Premier Imran Khan for asking Pakistan-occupied Kashmir (PoK) people to wait for his signal to march towards the Line of Control (LoC).“We know nobody is going to come here at his [Khan’s] instance,” Mr. Malik had said. The poser to the Minister pertained to the recent changes made by India in the constitutional provisions for Jammu and Kashmir, and the risks involved.

Therefore, that’s not something they’re going to let that happen easily. So our challenge today is actually to sort of ensure that this works on the ground “and to do that, the beginning is to prevent loss of life and then the changes are made,” the Minister said. Many of the restrictions which have been imposed are precautions to ensure there is no loss of life, he said, adding these are common sense precautions.

“There is a lot of experience which has gone into that precaution. If you look at the events in 2016, for example, we saw how the internet and social media was used to radicalise and to mobilise,” he said.“So obviously, if you’re going to walk into this situation, you are not going to let the internet be used by people whose intentions are malevolent. I’m not minimising the challenges, but I think the intent is really to persevere and to make sure that there are enough changes on the ground so that people’s thinking also change accordingly,” Mr. Jaishankar said.

“The choice as this government came back to power was clear. Either we had more of the past policies and the prospect of further radicalisation. Or we had a decisive change in the landscape and a change of direction towards de-radicalisation,” he said.The economic costs of the status quo were visible in the absence of entrepreneurship and shortage of job opportunities. The social costs were even starker: in discrimination against women, in lack of protection for juveniles, in the refusal to apply affirmative action and in denial of the right to information, education and work, he said.

All this added up to security costs as the resulting disaffection fed separatism and fuelled a neighbour’s terrorism. At a broader level, these realities also contradicted our commitment that no region, no community and no faith would be left behind, he said. The legislative changes made this summer put India and the entire region on the road to long-term peace. That is the reality today in the making, Mr. Jaishankar said.