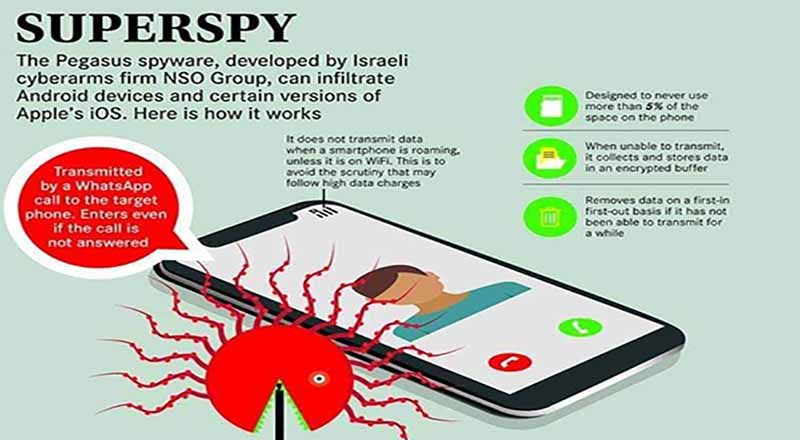 Pegasus is a spying software developed by Israel’s NSO. Reports claim that phones of over 40 Indian journalists were hacked. The Chairperson of the parliamentary Standing Committee on Information Technology, Dr. Shashi Tharoor has demanded an independent probe into the matter.

It is becoming clear that perhaps there is a need for an independent enquiry headed by a Supreme Court judge who would have the power not just to summon witnesses, but also to weigh the evidence in a judicial manner. The spyware is developed by the Israeli firm NSO Group and it can remotely track and perform complete data extraction without leaving any traces.

Any illegal malware, hacking of mobile and digital data of any individual is an infringement of an individual’s privacy, which is guaranteed by the Constitution. It is under challenge and it is the duty of the government to order an independent inquiry because the government cannot investigate its own actions, he said. It is high time that people are assured that their privacy is safe.

A question arises on if India is using the Pegasus Spyware in the country or not, Government should clarify with the lous and clear voice and no diplomatic talks.

There is an atmosphere of fear in society that anything is now hackable and people in power are misusing authority to invade people’s privacy and lives, he said.

Dr. Tharoor said, it is a matter of concern because obviously in our country, we are a democracy, there is freedom of expression, you don’t expect the government to be interfering with journalists doing their duty. Senior leaders were accusing the Government of defending Pegasus spyware issue instead of probing this serious cause.

Former Rajasthan deputy chief minister Sachin Pilot on Wednesday demanded an independent probe into the charges of snooping on politicians, journalists and others using Pegasus spyware. He said privacy has been breached and it has been established with the facts revealed, and the Centre has no reason for not initiating an independent inquiry into the matter.

This is a very serious issue and an independent inquiry is necessary to get to the bottom of it. The probe should be conducted by a joint parliamentary committee or in the supervision of the Supreme Court because impartiality cannot be expected from the Government of India, he said.

On Monday, the new Information Technology minister Ashiwini Vaishnav described the reports as “highly sensational”, hours before it emerged his own phone number had been on a list of potential hacking targets. Union Home Minister Amit Shah attempted to repurpose his infamous chronology comment and make vague remarks about a global conspiracy.

In a statement, the CPI (M) said the Central government must answer and come clean on using the Pegasus cyber software for surveillance of Indian citizens in an illegal and unauthorised manner. It further pointed out that two years ago, the party had raised concerns in Parliament that this spyware was being used in India as revealed by WhatsApp. The Modi government’s response had not categorically denied that it engaged the services of NSO but claimed that there is no “unauthorized surveillance,” the party said.

“Use of a cyber spy software to hack smartphones even by the government is prohibited under Indian laws. Under what law has the government undertaken such surveillance activities over citizens? The right to privacy is a fundamental right as laid down by the Supreme Court, but this BJP government is prevaricating on legislating the privacy law,” the CPI (M) added.

Researchers at Amnesty have worked to create a toolkit to find out if your phone is infected by the Pegasus spyware. The toolkit is open source and has been published on Github, allowing everyone to inspect the source code and verify if it is reliable.

The Mobile Verification Toolkit can be used for both iOS as well as Android devices. It uses a command-line interface, so it may not seem very user friendly at first, but detailed documentation has been published with usage instructions.

The toolkit requires installation of Python dependencies – these are available on the MVT website along with instructions.10:40

How space movies have evolved over 120 years

We decoded how Jeff Bezos and Richard Branson got to space