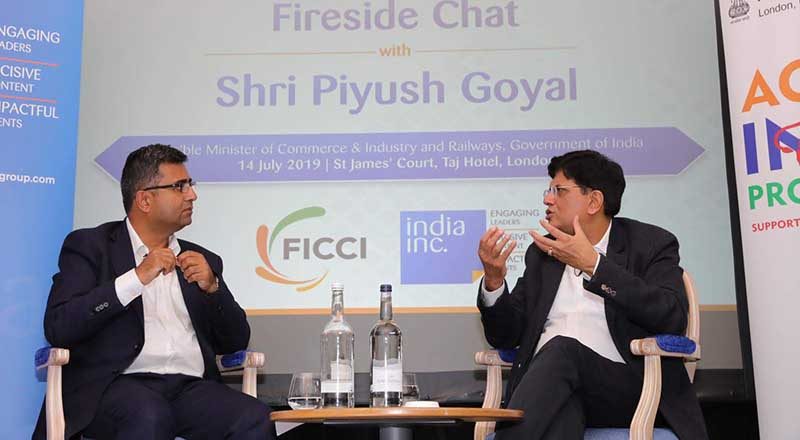 Piyush Goyal, Commerce and Industry Minister had participated in the India Day Conclave on July 16 in London with an objective to show investment opportunities in India.

On his meeting during the Fire side chat with Indian Diaspora Manoj Ladwa, Founder & CEO, India Inc. said He further said that his Ministry is studying profiles of corrupt officials in a bid to send ‘right message’ to the people. He said, “Action is being taken against officers who had integrity issues in several departments. My own Railways Ministry is now studying profiles of many officers to see if some action can be initiated to give a message to the others.

Goyal will also meet Indian diaspora and interact with Indian business leaders. He will also address India-UK Joint Economic Trade Committee (JETCO) in London, besides meeting British Secretary of State for International Trade Liam Fox. India Day conclave is co-hosted by the UK Government and the City of London.

“One of the key objectives is to show opportunities to invest in India to the City of London’s most prominent institutional investors.

The minister will seek to raise the country’s profile among international investors of the Green Growth Equity Fund, which the UK and Indian governments have jointly set up with an investments of 120 million pound each.

Today, around 800 Indian companies operate in the UK employing 1,04,932 persons, spanning goods like automotive, pharmaceuticals and chemicals and services in sectors such as technology, engineering and finance.

The UK is the third-largest investor in India and is among the country’s main trading partners. Trade totalled 13.6 billion euro in 2018.