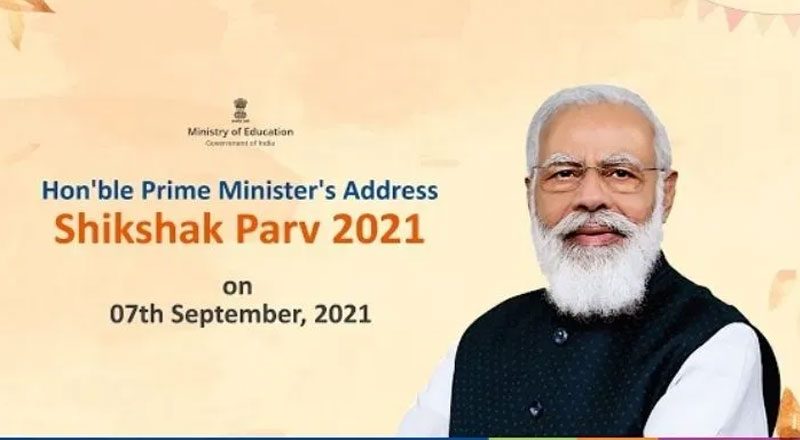 Addressing the gathering, the Prime Minister congratulated the teachers who have received the National Award. He commended the contribution the teachers have made for the future of students in the country in difficult times. He said that today, on the occasion of Shikshak Parv, many new schemes have been started which are also important because the country is currently celebrating the Azadi ka Amrit Mahotsav. Taking new resolutions for how India will be after 100 years of independence. The  Prime Minister praised students, teachers and the entire academic community for rising up to the challenge of pandemic and asked them to take forward the capabilities developed to deal with that difficult time. “If we are in the midst of a transformation period, fortunately, we also have modern and futuristic new National Education Policy” , he said.

The Prime Minister praised the contribution of academicians, experts, teachers, at every level of the formulation of the National Education Policy and its implementation. He urged everyone to take this participation to a new level and also to involve society in it. These transformations in the education sector are not just policy-based but also participation -based, he added.

The Prime Minister said ‘Vidyanjali 2.0’ is like a platform for the country’s resolve of ‘Sabka Prayas’ with ‘Sabka Saath, Sabka Vikas, Sabka Vishwas’. In this society, our private sector has to come forward and contribute to increasing the quality of education in government schools.

The Prime Minister said that in the last few years, public participation is again becoming the national character of India. In the last 6-7 years, due to the power of public participation, many things have been done in India, which were difficult to imagine earlier. When society does something together, then the desired results are assured, he said. The Prime Minister said that everyone, in whichever sphere of life, has a role in shaping the future of the youth. He recalled the stellar performance of our athletes in the recently concluded olympics paralympics. He expressed happiness that athletes have accepted his request that every player visit at least 75 schools during Azadi Ka Amrit mahotsav. This will inspire the students and many talented students will get encouragement to go forward in the field of sports, he said.

The Prime Minister said that for the progress of any country, education should not only be inclusive but should also be equitable. He added that National Digital Architecture i.e. N-DEAR is likely to play a major role in eradicating inequality in education and its modernization. N-DEAR will act as a ‘super-connect’ between various academic activities in the same way as UPI interface revolutionized the banking sector.  The country is making technology like Talking Books and Audiobooks a part of education. He said

School Quality Assessment and AssuranceFramework (S.Q.A.A.F) , which was operationalized today, would address the deficiency of the absence of a common scientific framework for dimensions like curricula, pedagogy, assessment, infrastructure, inclusive practices and governance process. SQAAF will help in bridging this inequality.

He added that in this rapidly changing era, our teachers also have to learn about new systems and techniques rapidly. He informed that the country is preparing its teachers for these changes through ‘Nishtha’ training programs.