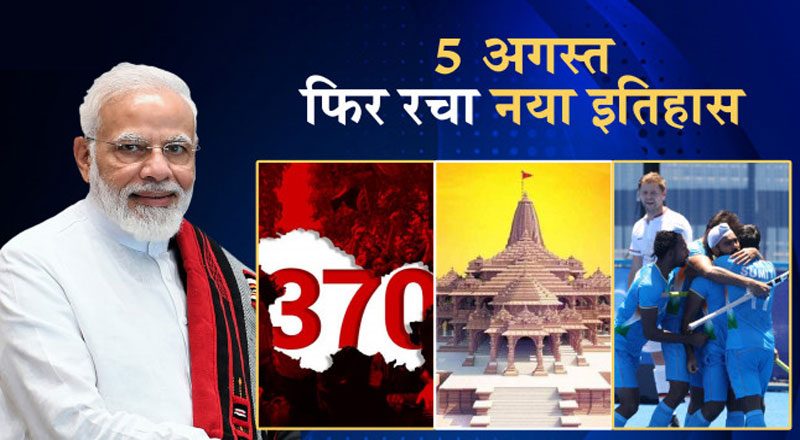 August 5 is becoming a significant date in the Indian History as abrogation of 370, and Ram Mandir are associated with this: PM

Our youth has taken a big step in re-establishing the glory of our national game hockey today: PM

Our youth is scoring goal of victory whereas some are doing self-goal due to political selfishness: PM

India’s youth has firm belief that both they and India are on the move.: PM

Double engine government has ensured that the schemes made for the poor, downtrodden, backward, tribals are implemented expeditiously in UP: PM

Uttar Pradesh was always seen through the prism of politics. The confidence that UP can become the powerhouse of India’s growth engine has emerged in recent years: PM

This decade is the decade of making up for the shortfall of the last 7 decades for Uttar Pradesh: PM
The Prime Minister, Shri Narendra Modi interacted with beneficiaries of Pradhan Mantri Garib Kalyan Anna Yojana in Uttar Pradesh via video conference. Chief Minister of Uttar Pradesh Shri Yogi Adityanath was also present on the occasion.

Addressing the event, the Prime Minister said August 5 has become very special for India. It was on 5th August, 2 years ago, the country had further strengthened the spirit of Ek Bharat, Shreshtha Bharat by abrogating Article 370, making every right and facility available to every citizen of Jammu and Kashmir. The Prime Minister also mentioned, on August 5, Indians took the first step towards the construction of a grand Ram temple after hundreds of years. Ram temple is being constructed at a rapid pace in Ayodhya today.