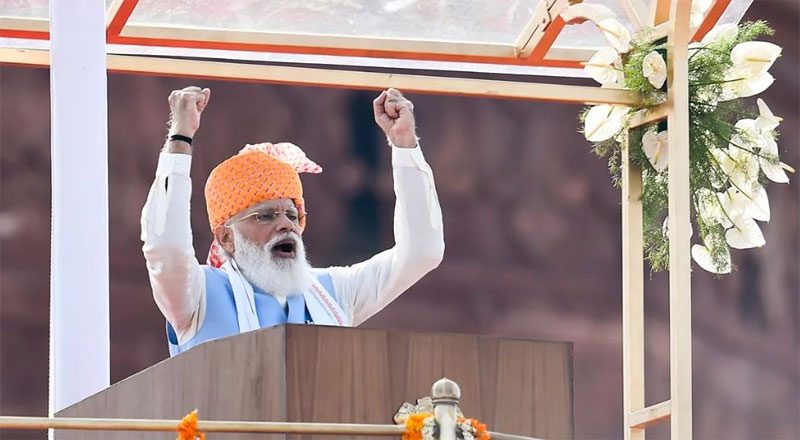 With a clear ambition to strengthen the Beti Bachao Beti Padhao initiative, PM Modi announced that all Sainik Schools across the country will now be open for girls. India marked another milestone on Sunday celebrating the 75th Independence Day, Prime Minister Narendra Modi, while addressing the nation from the ramparts of the Red Fort, announced that the Centre will soon launch the Rs 100 lakh-crore Gati Shakti national infrastructure plan to boost the country’s economy.

The government’s focus is to make small farmers, who own less than two hectares of land and comprise over 80 percent of all farmers, the country’s pride, Modi added. Rice provided under any scheme will be fortified by 2024, the prime minister announced.

In 75 weeks of the ‘Azadi ka Amrit Mahotsav’, 75 ‘Vande Bharat’ trains will connect different parts of the country, the prime minister announced. The prime minister said the capitals of northeast states will soon be connected with the railways. The region is also getting connected with Bangladesh, Myanmar and Southeast Asia. The development of Jammu and Kashmir is visible on the ground, adding that the delimitation exercise is on and preparations are underway for assembly polls there.

Reservation is being ensured for Dalits, STs, backwards and general category poor, he added in his speech and emphasised that the hand-holding of deprived communities is necessary.

Over 4.5 crore new households have received piped water supply within two years of ‘Jal Jeevan Mission‘, he said. The prime minister gave a call for ‘Sabka Prayas’ along with ‘Sabka Saath, Sabka Vikas, Sabka Vishwas’ for building a new India.