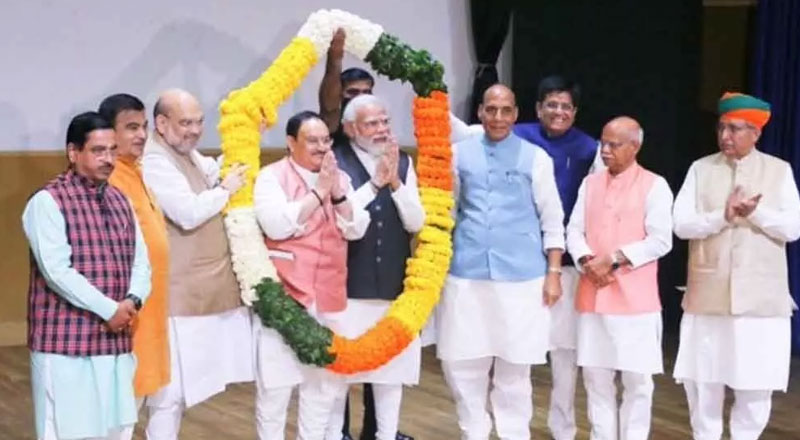 Prime Minister Narendra Modi on Tuesday morning ensured that the Bharatiya Janata Party (BJP) national president Jagat Prakash Nadda was garlanded first at the Parliamentary party meeting in a clear gesture meant to acknowledge the role of the organisation in the recently concluded Assembly elections.

The Parliamentary party meeting of the BJP gave rousing welcome to Prime Minister Narendra Modi at Ambedkar Bhavan on Tuesday morning. The meeting, a first in the ongoing second part of the Budget session of Parliament, took place in the backdrop of the recently concluded Assembly elections in Uttar Pradesh, Uttarakhand Goa, Manipur, and Punjab.

In a clear gesture to acknowledge the role of the party workers and leaders in the BJP’s victory in four states, the Prime Minister nudged Nadda to come in front of himb and get garlanded first.

The party leaders interpreted Prime Minister’s gesture, saying that this is a clear message that the organisation is supreme and the party president’s role as far as electoral success is no less than that of PM Modi.

The meeting took place at the Ambedkar Centre on Janpath road due to the ongoing repair work in the Parliament library building.

The BJP has retained power in Uttar Pradesh by winning 255 out of 403 constituencies, securing a 41.29 per cent vote share.

The BJP emerged as the single largest party in Goa winning 20 seats in the 40- member state Assembly and decimated Congress to 11 seats.

The BJP has secured a majority in Manipur Assembly elections, reducing other parties to single digits and will now form the government in the state for the second consecutive term.

In the elections, the BJP went solo this time and contested all seats alone. It won 32 seats out of 60 in Manipur.

The BJP has come back to power for the second consecutive term in Uttarakhand with a two-thirds majority in the 70-member Assembly. manish