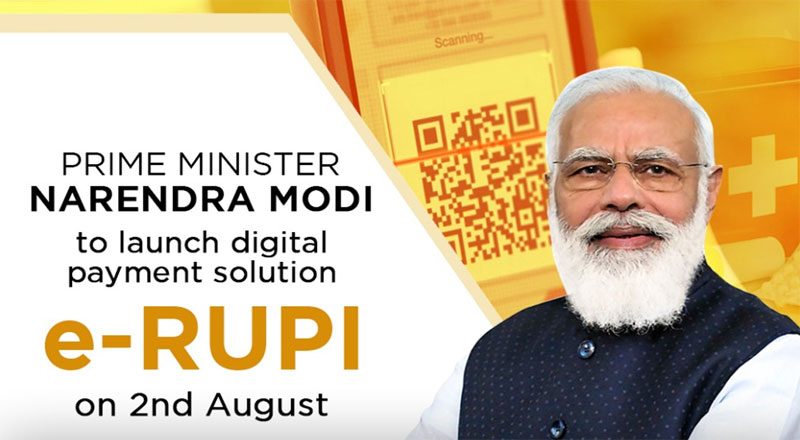 Prime Minister Narendra Modi on Monday launched e-RUPI, an electronic voucher that promotes digital payment . “Today the country is giving a new dimension to digital governance,” said PM Modi during the virtual launch. “e-RUPI voucher is going to play a huge role in making DBT more effective in digital transactions in the country,” he added.

It is a QR code or SMS string-based e-Voucher, which is delivered to the mobile of the beneficiaries. The users of this seamless one-time payment mechanism will be able to redeem the voucher without a card, digital payments app or Internet banking access, at the service provider, the official statement said.

The instrument has been developed by the National Payments Corporation of India on its UPI platform, in collaboration with the Department of Financial Services, Ministry of Health and Family Welfare and National Health Authority.

The statement said e-RUPI connects the sponsors of the services with the beneficiaries and service providers in a digital manner without any physical interface. It also ensures that the payment to the service provider is made only after the transaction is completed.

An expert says, this e-RUPI has the capability of passing on the above-mentioned benefits. It it could be mounted on the blockchain, then the duplication, then the duplication of payment or fake or fraudulent payment payment charges can be tackled,thus adding more brownie points to the government’s kitty. It is for the sure that, Government of India will have a similar agenda as the Indian CBDC,the financial inclusion which started with the mamoth exercise of Jana Dhan Yojana initiated by the PM of India.

Being pre-paid in nature, it assures timely payment to the service provider without the involvement of any intermediary. The release said e-RUPI is expected to be a revolutionary initiative for ensuring a leak-proof delivery of welfare services.

It can also be used for delivering services under schemes meant for providing drugs and nutritional support under Mother and Child welfare schemes, TB eradication programmes, drugs and diagnostics under schemes like Ayushman Bharat, Pradhan Mantri Jan Arogya Yojana besides fertilizer subsidies.

The private sector can also leverage these digital vouchers as part of their employee welfare and corporate social responsibility programmes, the release said.