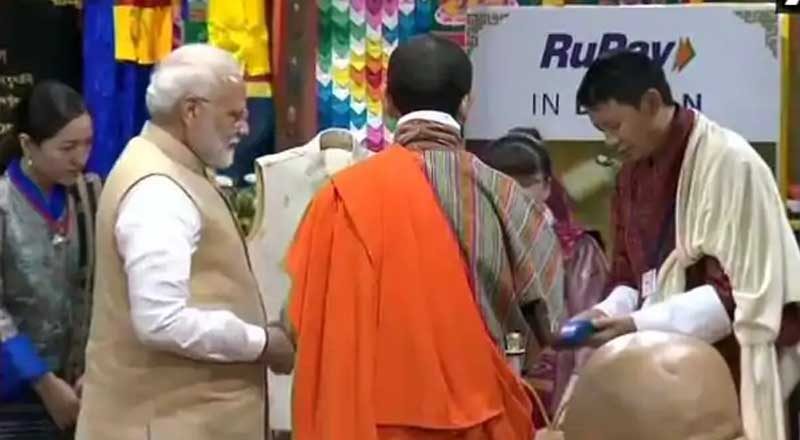 Prime Minister Narendra Modi on visit to Bhutan for a two-day visit to the country received a guard of honour at the Tashichhoedzong Palace before the King. PM Modi also launched RuPay Card in Bhutan by making a purchase at Simtokha Dzong.

A total of nine Memorandums of Understanding (MoUs) were signed between India and Bhutan in the presence of PM Narendra Modi and Bhutanese Prime Minister Lotay Tshering at Simtokha Dzong in Thimphu. One power purchase agreement (Mangdechhu hydroelectric power plant) was also signed between the two countries, along with the remote launching of the ISRO-built Ground Station for South Asian Satellite.

In a joint statement with Bhutan PM Lotay Tshering, PM Modi said, “Who will not want a friend and a neighbour like Bhutan. It is an honour for us that India is a part of the development of Bhutan.”

PM Modi said that Bhutan has a special place in the heart of 130 crore Indians and expressed pleasure at visiting the country at the beginning of his second term as prime minister.

“India and Bhutan may vary in size but our beliefs, values and motivation are common. Today, I am overwhelmed with the sense pride that the two countries are living the definition of true friendship” the Bhutan PM said.

The e-plaque of the interconnection between India’s National Knowledge Network and Bhutan’s Druk Research and Education Network was also unveiled during the event.