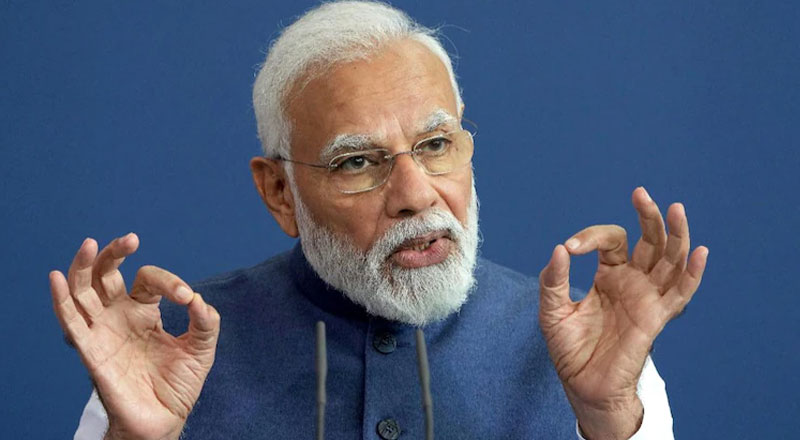 In the wake of the Finance Minister Nirmala Sitharaman announcing a sizable cut in fuel prices, Prime Minister Narendra Modi said on Saturday that people are the first priority for his government.

The government on Saturday cut excise duty on petrol by a record Rs 8 per litre and that on diesel by Rs 6 per litre to give relief to consumers from high fuel prices. The high fuel prices have also pushed inflation to a multi-year high.

Modi tweeted, “It is always people first for us! Today’s decisions, especially the one relating to a significant drop in petrol and diesel prices will positively impact various sectors, provide relief to our citizens and further ‘Ease of Living’.”

The decision to give a Rs 200 subsidy per cylinder to beneficiaries of the Ujjwala scheme was also highlighted by the prime minister.

The excise duty cut will translate into a reduction of Rs 9.5 a litre on petrol and Rs 7 a litre in diesel after taking into account its impact on other levies.

In a tweet in Hindi, Adityanath said, “Under the leadership of Prime Minister Narendra Modi, the Centre in public interest has reduced the excise duty by Rs 8 per litre on petrol, and by Rs 6 per litre on diesel.”

“This decision, which is dedicated to public welfare, will benefit all sections of society in an equal manner. Thank you prime minister.”

Union Home Minister and senior BJP leader Amit Shah said in a tweet in Hindi, “Even in this challenging global situation, under the leadership of PM Narendra Modi, the central government has given a huge relief to the general public by reducing the excise duty on petrol and diesel and giving a subsidy of Rs 200 on gas cylinders”.

He also said Modi is a sensitive leader who cares for every section of the country.

For the last eight years, the concerns and the interests of the poor, farmers and the general public of the country have always been at the centre of the decisions of the Modi government, he said.

“I express my gratitude to Narendra Modi and (Union Finance Minister) Nirmala Sitharaman for this public-friendly decision,” he said.

In a set of tweets, Bommai said the subsidy of up to 12 cylinders on cooking gas will be a boon for women.

“Price of petrol to reduce by Rs 9.5/litre & diesel by Rs 7/litre. I thank Hon’ble PM @narendramodi Ji on behalf of Karnataka for reducing central excise duty by Rs 8/litre on petrol & Rs 6/litre on diesel & FM @nsitharaman Ji for a subsidy of Rs 200 per gas cylinder,” Bommai tweeted.