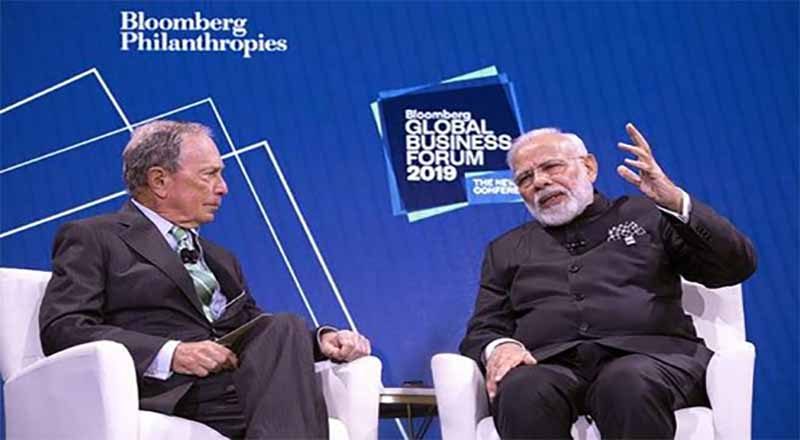 Prime Minister Narendra Modi made a pitch for India’s membership of the Nuclear Suppliers Group (NSG) in New York, as he addressed a largely business gathering in the Bloomberg Global Business Forum where he delivered the keynote address.

As part of an answer on climate change and India’s energy needs. “One challenge that is before us today is that of nuclear energy, because, since we are not a member of the NSG, we do not really have the ability to get the fuel for producing nuclear energy,” Mr. Modi said.

“If we were to get that opportunity, we could perhaps be a model in this area for the world,” he said.

The NSG controls most of the world’s nuclear trade. While the U.S. and other countries support India’s entry into the NSG, China has opposed it saying India has not signed the Nuclear Non Proliferation Treaty. However, India and the U.S. announced in March that six U.S. companies would set up nuclear power reactors in India.

PM Modi said in the UN Climate Action Summit on, 450 GW target for solar energy and a water project (Jal Jeevan) that includes rainwater harvesting and river management, as well as restrictions on the use of single-use plastics. “We are starting a very big movement to stop the use of plastic on the 2nd of October on the occasion of the birth anniversary of Mahatma Gandhi,” he said.

On the use of coal, he said a poor country like India, could not ignore the fact that it had the third largest coal reserves in the world, but would need to make mining more environmentally friendly and adopt coal gasification technology.

In Box: While making a pitch for investments in India, including in infrastructure, urbanisation, defence and technology.

“Your desires and our dreams match perfectly,” Mr. Modi told the audience. He talked up his government’s reforms – including a mention of GST (a pan-India indirect tax on goods and services), the bankruptcy and insolvency laws, unique ID (Aadhaar) and financial inclusion, which had brought 370 million individuals bank accounts in a short period of time.

He mentioned intellectual property at least twice during the session. IP has been another concern for U.S. businesses as India has continued to be placed on a U.S. government ‘Priority Watch List’ for its IPR practices.

Lastly, PM Modi  said, purchasing power in India was increasing, making it a prime market for those who wanted to invest where there were opportunities to scale up their businesses.