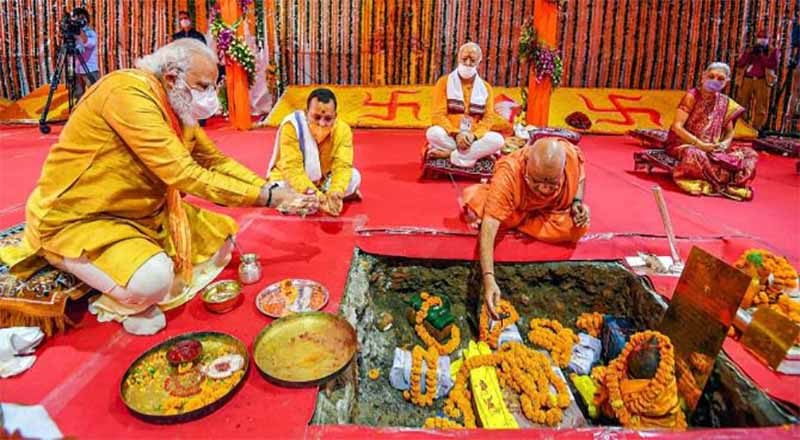 In a highly-anticipated event watched by millions on television, Prime Minister Narendra Modi Wednesday laid the foundation in Ayodhya of a Ram temple, the culmination of a campaign that fuelled the rise of the Bharatiya Janata Party and marked the fulfilment of one of its core poll promises.

Amid the chanting of shlokas, Modi consecrated the very first bricks for the temple at the spot where many devout Hindus believe Lord Ram was born.

The wait of centuries has ended, he said after performing the groundbreaking ceremony, made possible by a Supreme Court verdict last year allowing the construction of the temple at the site where ‘kar sevaks‘ demolished a mosque in 1992.

IMAGE: Modi also became the first Indian PM to visit the Ram Janmabhoomi and the Hanumangarhi temple, according to a statement issued by the Uttar Pradesh government. Photograph: Press Information Bureau of India

The day also coincided with the first anniversary of the abrogation of provisions of Article 370, scrapping the special status for Jammu and Kashmir.

Modi described Ram as the common thread in India’s unity in diversity, and drew a parallel between the country’s independence movement and ‘centuries’ of people’s struggle to build the temple at Ram Janmabhoomi.

He cited values associated with Ram and said, “We have to take care of everyone’s sentiments.

“We have to join stones for the construction of the Ram temple with mutual love, brotherhood,” he said.

“We have to bring development to everyone with everyone’s trust and help. It should be kept in mind that progress has taken place when humanity believed in Ram but destruction has happened when we strayed from his path,” he added.

He told the gathering that a grand temple will now be built for ‘Ram Lalla’, the infant Ram, who had been living in a temporary tent for years.

“Many people made sacrifices for the Ram temple. I pay my respects to all of them,” he said.

Some Ram Janmabhoomi movement leaders, including former deputy prime minister L K Advani, were not at the venue where the organisers had invited only 175 people.

The guest list was short because of the COVID-19 pandemic and the invitees sat on chairs placed apart to maintain social distancing. 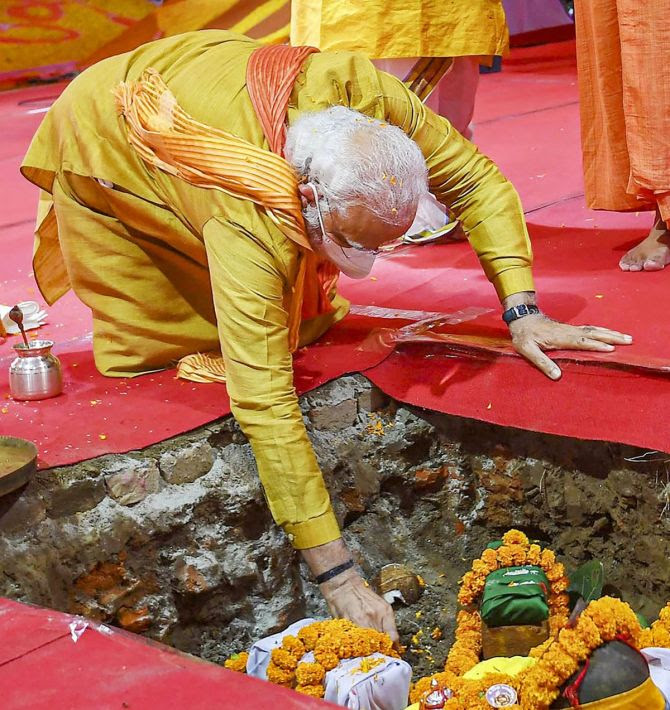 Sending out the message that ‘Ram is everywhere, Ram belongs to all’, Modi said the temple symbolises India’s rich heritage and will be an inspiration to all of humanity.

The construction of the Ram temple is an instrument to unite the country, he said, adding that it will lift the economy of the entire region.

He released a postage stamp to commemorate the event. 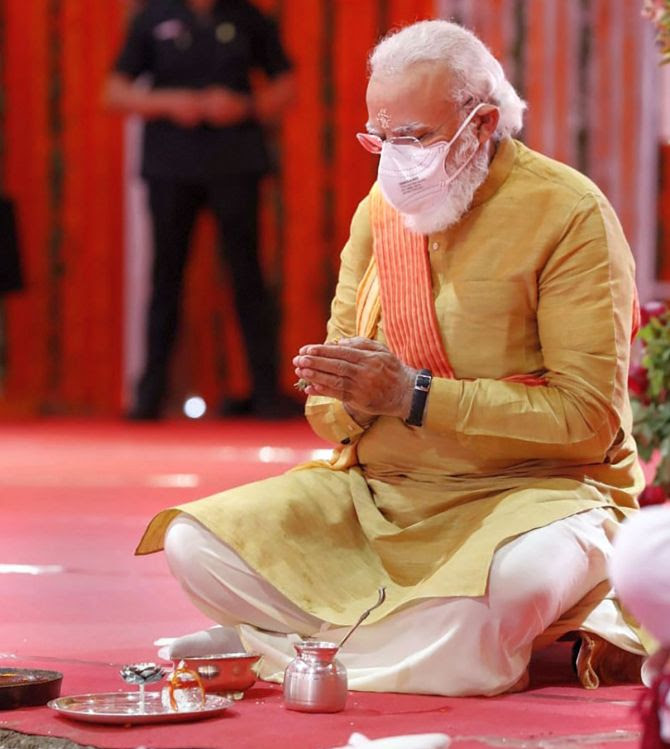 The ceremony marked Modi’s return to Ayodhya 28 years after he accompanied the then BJP president Murli Manohar Joshi on his ‘Tiranga Yatra’.

He also played a role in Advani’s ‘rath yatra‘ to mobilise support for building the temple in Ayodhya. IMAGE: The PM performs the groundbreaking ceremony of a temple dedicated to the Hindu god Ram, watched by Rashtriya Swayamsevak Sangh (RSS) chief Mohan Bhagwat, right, and others in Ayodhya. Photograph: PTI Photo

“When we took the pledge, our then Sangh chief Balasahab Deoras had told us we would have to work hard continuously for 20-30 years and we did,” he said.

The groundbreaking was celebrated with smaller events elsewhere — from the blowing of a conch at a jewellery shop beyond the barricades in Ayodhya itself to more elaborate rituals in Delhi’s Chattarpur temple complex.

“A puja has been going on non-stop for three days. The ‘Ram darbar’ has been decorated. A replica of the ‘shila’ (foundation stone) has been prepared and it will be sent to Ayodhya along with other material,” temple administrator Kishor Chawla said. The event also triggered clashes in West Bengal and Assam. BJP workers clashed with police in at least three places in West Bengal when they were stopped from celebrating amid a lockdown, officials said.

In Assam’s Sonitpur district, local people objected to the loud music and slogans shouted by Bajrang Dal workers on motorcycles.

Their motorcycles were set ablaze and police opened fire in the air, officials said.

‘Being built in tune with law, it defines India’s spirit of social harmony and people’s zeal. It will be a testimony to ideals of RamRajya and a symbol of modern India,’ he tweeted. IMAGE: The PM offers prayers at the Hanumangarhi temple ahead of the foundation-stone laying ceremony of the Ram temple, in Ayodhya. Photograph: PTI Photo

All India Majlis-e-Ittehadul Muslimeen chief Asaduddin Owaisi said the prime minister’s participation at the bhoomi pujan went against the Constitution, and marked the victory of majoritariansim.

“Today is a victory of Hindutva over secularism,” he said.

The Left also criticised the ceremony, with the Communist Party of India-Marxist saying it provided ‘retrospective legitimisation’ for the destruction of the Babri Masjid.

Last November, the Supreme Court ruled that a Ram temple can be build at the site where the 16th century mosque was demolished in December 1992.

While allotting the Ram Janmabhoomi site for a temple to be built by a trust, it ordered that a five-acre plot should be found elsewhere in Ayodhya for a new mosque.