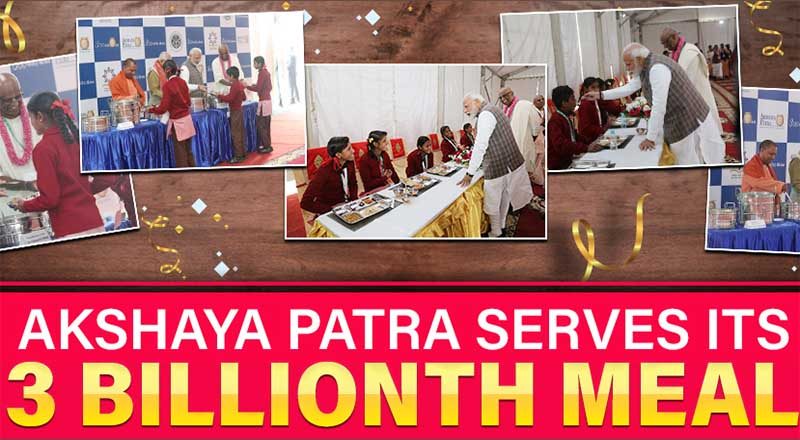 18 years of committed effort and perseverance beautifully culminated into a historic milestone on 11 February 2019 as The Akshaya Patra Foundation served the 3 billionth meal since its inception in 2000. The commemoration of this remarkable feat was held in Vrindavan, Uttar Pradesh in the august presence of Honourable Prime Minister Shri Narendra Modi.

Prime Minister Narendra Modi unveiled the ceremonial plague to mark the serving of the 3 billionth meal. Addressing the gathering and appreciating Akshaya Patra’s work, Modi said, “Donation given as a sense of responsibility without the thought of doing a favour, at the right place, at the right time and to deserving people is called ‘satttvik daan’. By providing nutritious meals to children of the nation for the last 18 years, Akshaya Patra is doing this ‘sattvic daan’. For this, I extend my best wishes to all of you associated with the Foundation. Your work is extraordinary, your service is extraordinary; it is an example of incredible dedication. Everyone involved with Akshaya Patra, right from the cooks to the ones who deliver and serve food to the children are helping the nation.” He further said, “Good nutrition and healthy childhood is the foundation of New India. By providing food regularly to children, dedicated workers like you are creating a strong foundation for the country. I congratulate your endeavour and effort; this effort is the best example of the ‘I to We’ journey; this is an example of self to selflessness.”