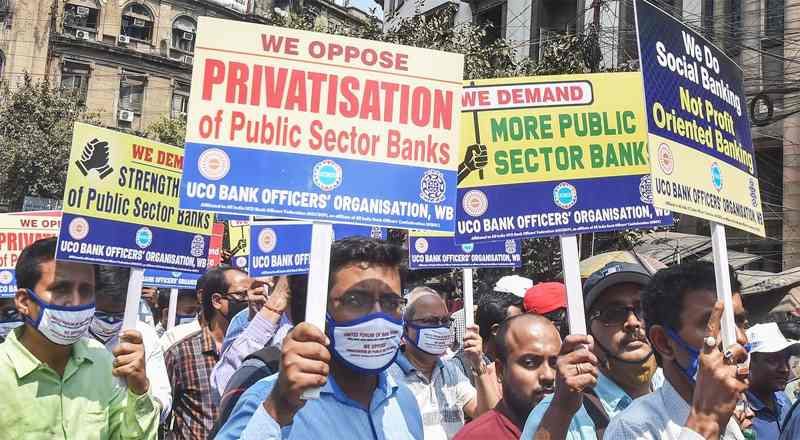 Finance Minister Nirmala Sitharaman had announced the proposal during her Budget 2021 presentation. This also comes after bank unions observed a 2-day strike to protest the privatisation. Now LIC employees to go for strike on Mar 18 to protest against the government’s proposal of disinvesting the insurer. of two public sector banks.

Banking services across India were affected over the past couple of days as public sector banks (PSBs) employees staged a two-day strike (March 15-16, 2021) to express displeasure over the government’s intent to privatise PSBs.

The impact was not only limited to customer services like cash withdrawals, cheque clearances, deposits, loan approvals and remittances but also government treasury operations.

But, that is not all. Employees of general insurance companies are undertaking a strike on March 17, and employees of Life Insurance Corporation (LIC) will protest on March 18.

FM Nirmala Sitharaman said, in her Union Budget 2021 speech on February 1, the Centre would privatise two more PSBs after it privatised IDBI Bank in 2019 and merged 14 PSBs over the past four years.

She also announced that one general insurance company will be privatised in FY21-22. For 2021-22 fiscal, the government has kept the disinvestment target at Rs 1.75 lakh crore. Out of this, Rs 1 lakh crore is to come from selling government stake in public sector banks and financial institutions and Rs 75,000 crore would come as CPSE disinvestment receipts.

Addressing the media on March 16, FM Sitharaman sought to assure protestors that not all banks will be privatised and “only some PSBs are selected for divestment to strengthen their financial condition.”

She assured that throughout the process, the government would protect the interest of employees such as salaries, scale, social security, pension and other benefits. She further said that, government will ensure that once privatised, “these institutions will continue to function.