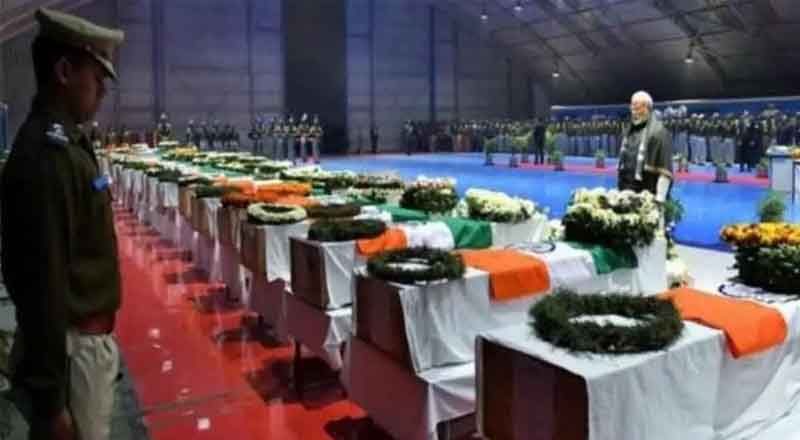 February 14 is always remembered as Valentine’s Day and celebrated all over to spread the message of love!

But a year ago, this day of love and romance turned a black day for India, when 40 CRPF Jawans lost their lives in the Pulwama Terror Attack.

Pakistan received a strict and straight reply around 12 days after the terror attack, when in the wee hours of February 26, Indian Air Force jets bombed the JeM camp in Balakot, in Pakistan’s Khyber Pakhtunkhwa.

Tributes to the brave martyrs who lost their lives in the gruesome Pulwama attack last year. They were exceptional individuals who devoted their lives to serving and protecting our nation. India will never forget their martyrdom,” Modi tweeted.

Home minister Amit Shah said, ‘India will forever be grateful to our brave hearts and their families who made the supreme sacrifice for sovereignty and integrity of our motherland.”

Defence minister Rajnath Singh tweeted, “Remembering the fallen CRPF personnel martyrs during dastardly attack in Pulwama on this day in 2019. India will never forget their sacrifices.”

Veteran actor Amitabh Bachchan too took to twitter to pen down his sentiments. He wrote, “It’s not just Valentine’s Day today, but February 14 also marks a year of the Pulwama attack, wherein around 40 CRPF personnel were killed when their convoy was targeted by a suicide bomber from Pakistan-backed Jaish-e-Mohammad.

Remembering those who lost their lives, Amitabh Bachchan shared a fan’s post and wrote, “On this day we remember them who sacrificed their lives so we could live  …” In another tweet Big B penned a note paying tribute to the martyrs.