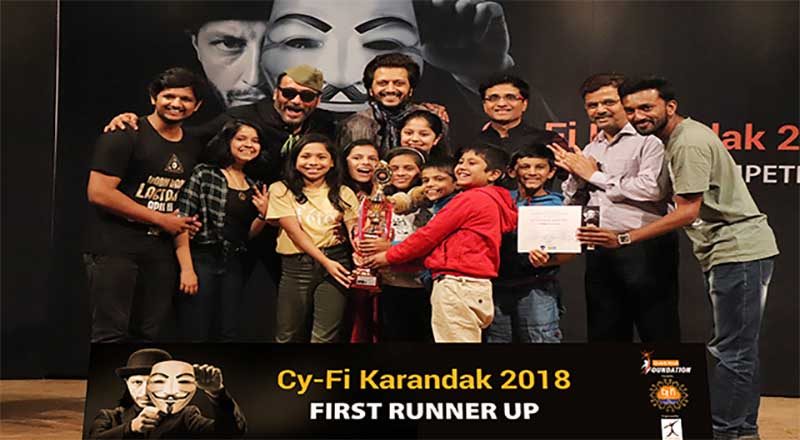 Marking the successful conclusion of yet another edition of its unique techno-cultural gala, Quick Heal Foundation has announced the winners of Cy-Fi Karandak 2018. Organised in association with Maharashtra Cyber and Theatre Academy at Sakal Lalit Kalaghar in Pune on December 16, 2018, the grand finale saw ‘I Agree’ by ‘Amche Amhi’ from Pune named the winner of the award from amongst nine finalist teams.

Speaking at the event, Kailash Katkar said, “The lamp that burns the brightest also casts the deepest shadows. Digital technology is a bit like that lamp. It is important that, while we enjoy the benefits that it brings, we also remain aware and updated about its risks and threats. Through Cy-Fi Karandak, Quick Heal Foundation wanted to raise awareness about the need for better cyber security.”

“The response that we have received for the event so far has been nothing short of amazing, and it would not have been possible without our partners, Maharashtra Cyber and Theatre Academy. I would like to congratulate the winning team, as well as all the finalists, for putting up such an engaging, entertaining show to educate people about the need for cyber security. I would also like to extend a special thanks to our Chief Guest, Riteish Deshmukh and Jackie Shroff, and our esteemed judging panel,” he added.

A unique competitive festival of one-act-plays aimed at raising cyber security awareness, the second edition of Cy-Fi Karandak registered an impressive response from participants, receiving over 100 entries from across Maharashtra. Theatre Academy – under the leadership of its President and acclaimed theatre artist Prasad Purandare – hosted the auditions at the regional centres of Pune, Mumbai, Aurangabad, Kolhapur, Goa, and Nagpur to select the nine finalists.

The grand finale of Cy-Fi Karandak 2018 showcased thought-provoking contemporary theatrical acts which provide a glimpse into today’s digitally-driven lifestyles, as well as the level of threats that users face today. Through the event, Quick Heal Foundation further underlined its commitment to creating a better world, where users are safe and secure in all of their digital interactions, through sustainable initiatives aimed at raising cyber security awareness.