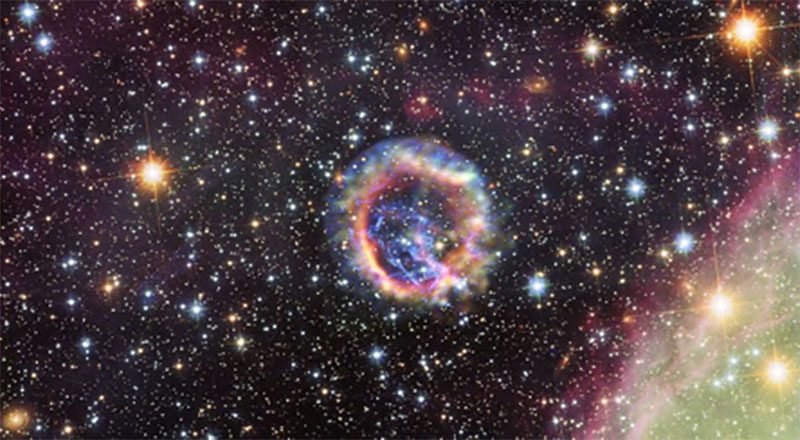 The remnant of a supernova. Photo: NASA/CXC/F. Vogt et al./ESO/VLT/MUSE/STScI

Radioactive dust sent out by ancient supernovas has been found in Antarctica. These findings may shed light on the mysterious interstellar clouds the solar system flies through regularly, scientists said. Tons of extraterrestrial dust — created by passing comets, asteroid collisions and exploding stars — falls on Earth daily. But scientists may not find it until long after it has fallen, and so lack details about the solar system’s recent interactions with its surroundings.

By contrast, this new study analyzes relatively fresh interstellar dust, and the findings may reveal insight into mysterious interstellar clouds and their relationship with our solar system.

“Scientists might be able to use our results to figure out how the solar neighborhood was shaped,” study lead author Dominik Knoll, an experimental nuclear physicist at the Australian National University in Canberra, told Space.com. “We know something about distant galaxies and stars and a lot about our solar system, but the nearby surroundings of our solar system need more investigation.”

Researchers behind the study suggest that our solar system is currently flying through a cloud of cosmic material thought to be shaped by supernovas.

Those stellar explosions may leave behind traces of the radioactive isotope iron-60, which the scientists found in Antarctic snow.

This study and future work could help explain more about our solar system’s past and its movements through the Milky Way, according to a synopsis published by the American Physical Society.

The team behind the study thinks that the iron-60 atoms found in the region were delivered to Earth in the last 20 years.

“I think Earth essentially picked [the element] up during the movement through the cloud, not like a real injection as you would expect from a very near supernova,” Dominik Koll, an author of the study, tells Axios by email.

The scientists had been concerned that the isotope might have been created by nuclear weapons, but the team ruled that out when the other concentrations of bomb-created isotopes didn’t match what they found in Antarctica.