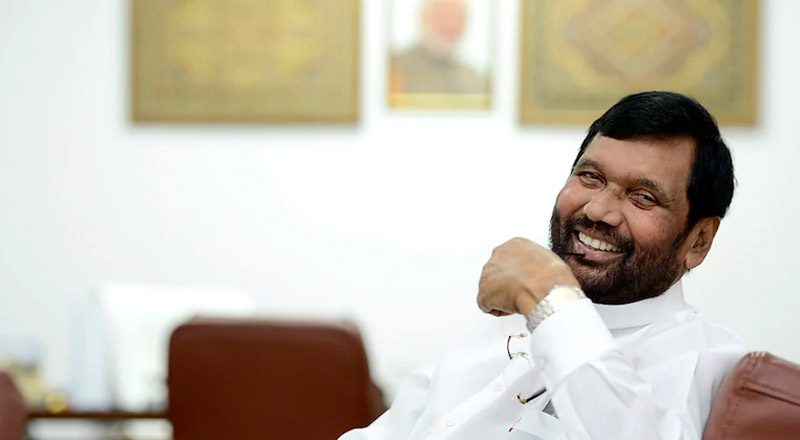 Union Minister Ram Vilas Paswan, passed away yesterday at the age of 74 due to heart failure.  He is survived by his wife and three children.

Lok Janshakti Party chief and his son Chirag Paswan broke the news on Twitter. “Papa …. Now you are not in this world but I know you are always with me wherever you are. Miss you Papa…,” he tweeted, with a throwback photo of his father hugging him.

Paswan, founder of Lok Janshakti Party (LJP) and one of the most noted Dalit leaders of the country had undergone a heart surgery a few days ago.

Paswan was socialist and anti-Emergency crusader who broke through Bihar’s deeply caste-stratified society to establish him at the highest level of Indian politics in a career spanning five decades.

Paswan, one of India’s tallest Dalit leaders who nurtured relationships across political parties, held the portfolios of food, public distribution, and consumer affairs. He was an eight-time Lok Sabha member from Bihar’s Hajipur, since 2019, was a member of the Rajya Sabha from Bihar.

Born in Khagaria in Bihar in 1946, he was elected for the first time as an MLA in 1969 as a member of an anti-Congress front after quitting his job as a police official, he rose through the ranks of various socialist parties, which changed forms with a periodic interval, and became a leading Dalit face.

He was one of the key ministers in the V P Singh government, which came to power in 1989, and pushed for implementing the Mandal Commission report, which recommended reservation for other backward classes, upending the pivot of politics, especially in Hindi-speaking states like Bihar and Uttar Pradesh forever.

It is an ode to his politics that believed in building bridges across social or political divides that he was one of the most liked state leaders among the upper castes even as he drew his support mostly from Dalits, a group which at times shared antagonistic relations with the more prosperous communities due to a number of social and political reasons.

It is also a tribute to his worth as a politician and his warm acceptance across parties as contrasting in their ideologies as the Congress and the BJP that he was courted by arch rivals like Atal Bihari Vajpayee and Sonia Gandhi and served as a valuable minister in the BJP-led NDA as well as the Congress-led UPA governments.

When he quit the Vajpayee government due to his growing differences with the saffron party, he had also attacked the then Gujarat Chief Minister Narendra Modi but when he joined hands with the Modi-led BJP in 2014, he soon became a trusted colleague of the prime minister, especially on Dalit issues.

“In politics people you support may forget you sometimes but if you attack a group, then they will never forget and forgive you”, Ram Vilas Paswan once said in an informal get-together when someone prodded him on the secret of goodwill and warm equations he enjoyed across parties of contrasting ideological hues and communities.

This kernel of Ram Vilas Paswan’s political philosophy very much defined the power man who might not have ever been a king but as a kingmaker outlasted many kings in his illustrious career.

Prime Minister Narendra Modi and union home minister Amit Shah were among the many politicians who tweeted their condolences to the departed leader’s family.

“I am saddened beyond words. There is a void in our nation that will perhaps never be filled. Shri Ram Vilas Paswan Ji’s demise is a personal loss. I have lost a friend, valued colleague and someone who was extremely passionate to ensure every poor person leads a life of dignity,” Modi said in his condolence message.

President Ram Nath Kovind also paid tribute. “In the demise of Union Minister Ram Vilas Paswan, the nation has lost a visionary leader. He was among the most active and longest-serving members of Parliament. He was the voice of the oppressed, and championed the cause of the marginalized,” he said.