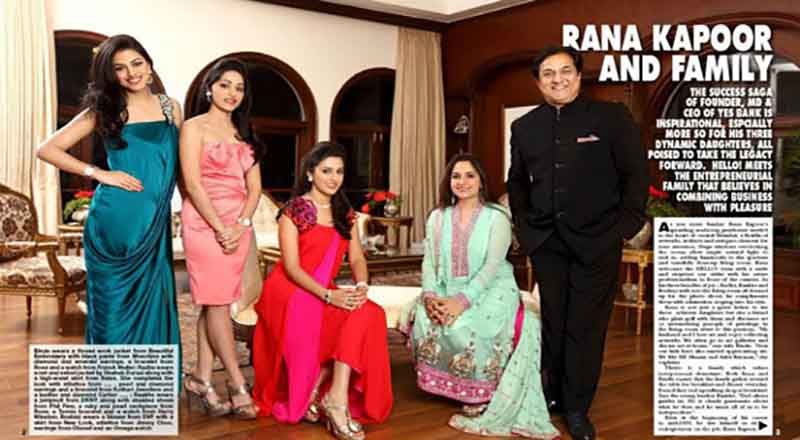 Rana says—if you don’t invest big, you don’t grow big. Afterall ,to whom the money belongs to ?

YES Bank has an exposure of Rs 13,000 crore to Reliance group entities and another Rs 3,300 crore to Essel group companies. YES Bank investors are concerned about the bank’s exposure.

Soon after Ravneet Gill took charge as the new CEO on March 1, the bank announced a net loss of Rs 1,507 crore for the quarter ended March 2019 (Q4) due to a fall in its non-interest income and a sharp rise in the provisioning for bad loans.

Gross non-performing assets (NPAs), as a percentage of gross advances, soared to 3.22 per cent in Q4, compared to 1.28 per cent in the year ago period.

The Enforcement Directorate has said that Yes Bank Founder Rana Kapoor has prima facie generated about ₹4,300 crore in black money and “laundering” the amount. Kapoor was arrested by the ED on Sunday on money laundering charges. Earlier, a CBI investigation had revealed that Kapoor and his family were paid ₹600 crore as kickback by DHFL.

Rana Kapoor’s daughter Roshni was prevented by ED from boarding a flight to London following a look out notice issued against the Kapoor family. As per ED said, the alleged kickbacks of ₹600 cr loan to DUVIPL was acquired by ‘pledging highly undervalued assets as mortgage’ with DHFL and its promoter, Kapil Wadhawan and others.

Simultaneously, it was also revealed that DHFL sanctioned a ₹600 crore loan to DUVIPL, run by Kapoor’s daughters — Roshni Kapoor, Radha Kapoor-Khanna and Raakhee Kapoor-Tandon — who are the company’s 100% shareholders.

Virtually snatching the thunder from the Central Bureau of Investigation, New Delhi, the ED swooped on Kapoor’s premises at 11 pm on March 6 (Friday night), took him for investigation and arrested him after around 30 hours, early Sunday morning.

Incidentally, the CBI-EOW, New Delhi, had filed its first information report against Kapoor and others on the morning of Saturday, March 7, when he was already under the ED’s detention, the sources pointed out.

The CBI’s FIR claimed that Kapoor, Wadhawan and others entered into a criminal conspiracy to extend financial benefits to DHFL through Yes Bank, in return for substantial “undue benefits” to Kapoor and his family members through their companies.

An expert says, Rana Kapoor and his family was simply doing the financial engineering for their  business benefits. Yes Bank subscribed to the DHFL debentures of ₹3,700 crore, DHFL reciprocated by giving kickbacks of ₹600 crore to Kapoor and his family disguised as a “loan” to DUVIPL, it says .

The ED said that Yes Bank had sanctioned another ₹750 crore loan to a DHFL group company which was corroborated by the company’s official Rajendra Mirashie who stated that DUVIPL gave five properties valued at ₹735 crore as mortgage to DHFL.

Investigations subsequently proved that the agricultural land was merely worth ₹40 crore against the inflated amount of ₹735 crore shown for the mortgage. Mirashie said that the Kapoors never interacted with him and all instructions were received by him through two aides — Rana Kapoor’s Sr. Executive Secretary Lata Dave or Kapil Wadhawan’s Executive Assistant S. Govindan.

He also stated that the DUVIPL had no business activities or any revenue and its properties of around 100 acres in Raigad were lying unutilised, though the loan was to be repaid in a single shot after 60 months (in 2023), but DUVIPL was only paying the interest so far.

Yes Bank grew 26 times in its size since its inception in 2003 to September 2018, when its troubles were finally made official by the Reserve Bank of India (RBI).

In Box:  Rana Kapoor used to reward top performers with ‘Golden Pin Awards’ and threw lavish parties for them at his sea-facing residence. “We couldn’t stop Rana from pumping in crores into publicity.

By the blessing of big business houses and politicians Rana Kapoor used to influence many by playing largely into the money laundering and Rana used to do huge media publicity to gain public sympathy. The bank would even lend money to corporates who had been refused by other lenders.

the bank has lost more than 90% of its value and its equity securities have been removed from the derivatives segment of all exchanges.

Right from the beginning, the man and the bank were one. All business decisions at Yes Bank, even where the bank’s board was involved, ultimately hinged on Kapoor’s whims and fancies. Many senior employees who couldn’t get along with him ultimately ended up leaving.

The bank’s outstanding loans grew from ₹55,000 crore in FY14 to ₹2.41 trillion in FY19. Despite knowing the inability of existing borrowers to repay, Yes Bank lent more money to them.That’s how “Rana created a task force that perfected the creation of an imperfect bank,” recalls the close confidante of Kapoor.

Yes Bank Founder Rana Kapoor told the court he was having hallucinations since he lost his “baby”, referring to Yes Bank. Kapoor added he was under psychiatric treatment and was taken to two hospitals. He was arrested for allegedly not cooperating in the money laundering probe.

In Box: These are public domain names including Anil Ambani (Group), Essel Group, DHFL, IL&FS (and) Vodafone are some of the very stressed corporate to whom Yes Bank has been exposed

The Central Bureau of Investigation (CBI) got into the act a day later and filed a first information report (FIR) against the Yes Bank founder, his wife Bindu and three daughters — Roshini Kapoor, Rakhee Kapoor Tandon and Radha Kapoor Khanna.

The family is accused of receiving Rs600 crore in kickbacks from an entity linked to the scam-hit Dewan Housing Finance Limited (DHFL). It’s alleged that Kapoor first had Yes Bank lend money to DHFL which then gave money to his family firm as a quid-pro-quo.

The CBI FIR has also named DHFL and its promoter Kapil Wadhawan, Dheeraj Wadhawan and various firms linked to Kapoor and Wadhawan families. All have been charged with criminal conspiracy, cheating, bribery, abetment of bribery and criminal misconduct under the Indian Penal Code (IPC) and the Prevention of Corruption Act.

The probe agency has stated that DHFL did not repay the Rs3,700 crore which Yes Bank had paid to it for subscribing to its debentures. In the same period, Yes Bank also sanctioned a loan of Rs750 crore to RKW developers — which was also a DHFL company — whose director is Dheeraj Wadhawan for their Bandra Reclamation project. The entire amount, the CBI said, “was siphoned off by Kapil Wadhawan since it was transferred to RKW without making any investment in the Bandra Reclamation project for which the loan was actually sanctioned.

Yes Bank account holders are facing difficulties in withdrawing cash from bank’s Automatic Teller Machines (ATMs). They are forced to wait at the branches.