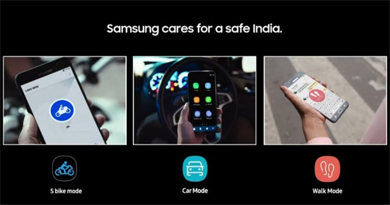 Samsung India has announced the next phase of its ‘Safe India’ campaign, continuing its commitment to sensitize people about responsible use of smartphones, especially when taking selfies, on the road.

The second phase of Samsung ‘Safe India’ campaign rolls out in Delhi, Mumbai, Chennai and Lucknow through messages being aired across radio, public information systems and LED walls as well as films and skits in schools and colleges across these cities.

In 2017, Samsung had pledged support to the Union Ministry of Road Transport and Highways’ drive to reduce road accidents, especially those that happen due to irresponsible usage of smartphones. India today has the highest number of road accidents globally.

Union Minister of Road Transport & Highways and Chief Ministers of Uttar Pradesh, Maharashtra and Tamil Nadu have joined the Samsung ‘Safe India’ campaign by not only sharing messages with the public on this important issue but also by involving their administration and the traffic police to actively participate.

Samsung will also partner with traffic police departments in the four cities to communicate with people on road safety through public information systems such as LED walls, text LED scroll bars and LED public display signage positioned at prominent areas in these cities.

“Samsung cares for its consumers and the community around it. As a market leader, it is our duty to take the lead and support the Government’s vision of reducing road accidents. We are extremely honoured that the leadership of this country and of the states have extended support to the Samsung ‘Safe India’ initiative, which has gathered pace this year,” said Deepak Bhardwaj, Vice President, CSR – Samsung India.