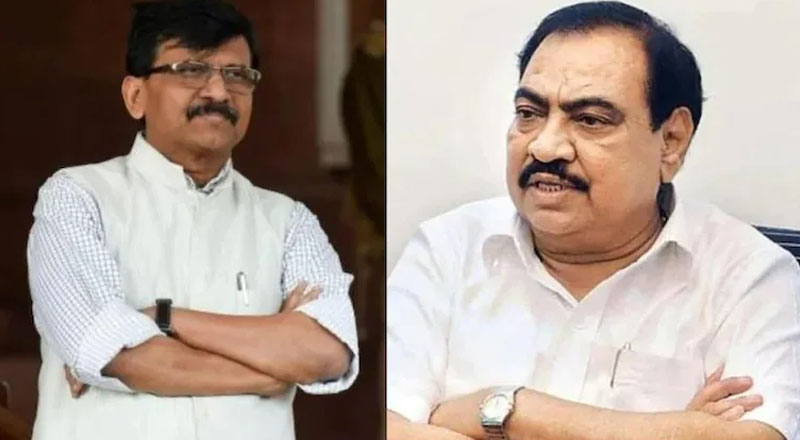 Police sources revealed that the phones of Shiv Sena MP Sanjay Raut and NCP leader Eknath Khadse were tapped on the pretext of them being anti-social elements.

An investigation into the phone tapping case has revealed that NCP leader Eknath Khadse and Shiv Sena MP Sanjay Raut’s phones were tapped on the pretext of them being anti-social elements, said sources.

The sources revealed that the first time Sanjay Raut’s phone was tapped for seven days on an emergency basis and the second time the phone was tapped for 60 days allegedly with the permission of the additional chief secretary (Home). Sources said that the request was made by the State Intelligence Department under a false name so that no one would know that Eknath Khadse or Sanjay Raut’s phone was being tapped.

While commenting on the issue, Shiv Sena MP Sanjay Raut said, “It has come to light that Nana Patole, Eknath Khadse, me and everyone else were tapped by lying that we were anti-social elements. While the Mahavikas Aghadi government was being formed in Maharashtra, we were being monitored and information was gathered about the new government. The central government is protecting Shukla. It is unfortunate.”

Khadse also expressed his anger over his phone being tapped while his party was in government. “My phone was tapped saying I am an anti-social element. I was with the BJP at that time and my phone was still tapped. I have asked the police to investigate who gave orders to tap my phone.

The phones of Khadse along with his personal assistant were allegedly tapped during the 2019 Maharashtra assembly elections. Senior IPS officer Rashmi Shukla, who formerly headed the State Intelligence Department of Maharashtra Police, is an accused in the case.

She has been accused of tapping the phone calls of Shiv Sena leader Sanjay Raut and NCP leader Khadse.