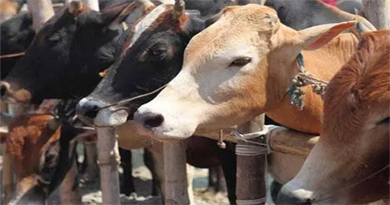 SaveCow has launched a GPS chip & Mobile App that connects Cows, Government, farmers and Police. Launched and co-designed at IIT Delhi Students, this microchip which is one-time installed on the cow, will stop cattle smuggling in India. This ultra-microchip device, once tagged on to a cow, will raise an alarm on a local policeman’s phones and alert police vans when the cow is moved away from its frequency zone. This will put an end to the cattle thefts and the endless killings.

An event was organized by Animal Welfare Trust at the India Habitat Centre on 31st July 2017 which was attended by spiritual leaders, businessmen, politicians, and farmers.

Vishal Singh, Activist of the cow protection movement said that there have been lot of killings of farmers, police & BSF personals by cow smugglers throughout India.

Defence expert Maj Gen (Rtd) PK Sehgal in the past has said that cattle smuggling on Indo-Bangladesh border was worth $1 billion. This MicroChip when tagged on cows will bring this cattle smuggling to almost zero percent. Few years back, about 2 million head of cattle were smuggled into Bangladesh annually from India.

Hundreds of policemen in India are killed or are attacked by cow smugglers every year. There are incidents of police personnel being shot, stabbed, occasionally burnt, in most cases, just mowed over conveniently by trucks stuffed with cattle, headed towards the Indo-Bangladesh border. Cattle smugglers are brutal and think little of ramming police cars and breaking through barricades.

There are reports that cow thieves & cattle smugglers are killing lots of farmers and those who keep cows, a crucial asset for many rural families and the rural economy. This gives rise to a circle of violence and grave crimes, with some groups exploiting the situation to their advantage.

In recent years, hundreds of BSF Jawans have been killed or sustained serious injuries after being attacked by cattle smugglers. The attacks on BSF have increased manifold as they attempt to stop the illegal cattle trade. The risks taken sometimes at the cost of its personnel lives all in a bid to save cattle, has led the BSF to question: should it protect the nation’s security at the border or chase cows.

While the focus on crimes committed in the name of cow protection is required, what is also required is a focus on problems of cow smuggling so that this menace is tackled from both the sides. This MicroChip will help solve this issue permanently.

The Federation of Indian Farmers & All India Kisan Union has welcomed this initiative and demand for chip tagging of cattle to prevent smuggling. This microchip device will put an end to the killings of innocent farmers, cattle owners, policemen as well as BSF soldiers.