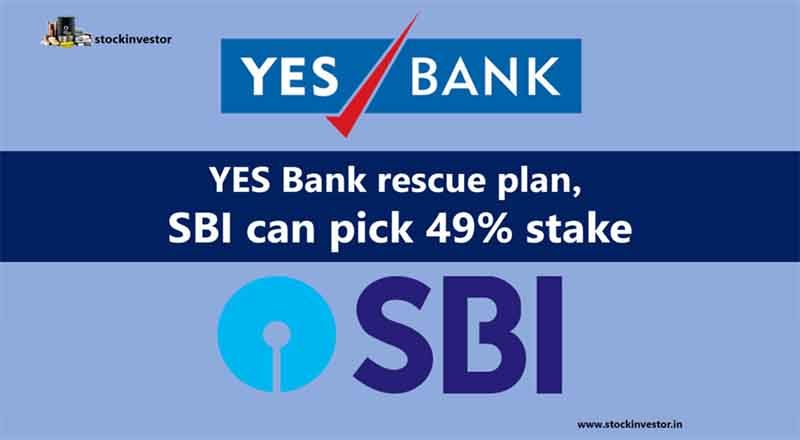 The Reserve Bank of India (RBI) has come out with the revival scheme to same Yes Bank that proposes State Bank of India purchasing a stake of up to 49% to bail out .

SBI has expressed its willingness to invest in Yes Bank and participate in its reconstruction scheme, the RBI said .

The proposal comes a day after the RBI took control of Yes Bank, the country’s fifth-largest private-sector lender, and imposed temporary limits on withdrawals after it failed to raise capital to cover for potential bad loans.

Shares of Yes Bank plunged almost 60% on Friday. The bank has lost 94% of its market value over the past year due to concerns related to rising bad loans and a capital crunch.

Sitharaman reiterated in a separate briefing that this issue will be resolved speedily. “We are working to protect the interests of the depositors and also those who invested in Yes Bank.”

As per the RBI’s draft proposal, Yes Bank’s authorised capital will change to Rs 5,000 crore. The number of issued shares will change to 2,400 crore of Rs 2 each, totalling Rs 4,800 crore. SBI will hold a 49% stake in the reconstructed Yes Bank after the capital infusion at a share price of Rs 10 each, including a premium of Rs 8, the RBI said.

This means that SBI may infuse about Rs 2,450 crore for a 49% stake in the troubled lender, according to the RBI’s draft proposal.

As per the proposal, SBI won’t reduce its holding below 26% before completion of three years from the date of infusion of the capital. SBI, the nation’s biggest bank by assets, had said late on Thursday that its board had given it an in-principle nod to explore an investment in Yes Bank.

Under the draft plan, all employees of the reconstructed Yes Bank will continue with the same salary and terms and conditions for at least one year.

Yes Bank had been trying for many funds to raise as much as $2 billion from investors in a bid to recover from the impact of bad loans.

This wasn’t the first time Yes Bank had said that it received interest from potential investors. In October last year, the bank said it had received a binding offer from a global investor to inject as much as $1.2 billion. That potential investor was Canada-based Erwin Singh Braich and Hong Kong’s SPGP Holdings. However, it later rejected Braich’s offer due to regulatory concerns as per VC Circle.