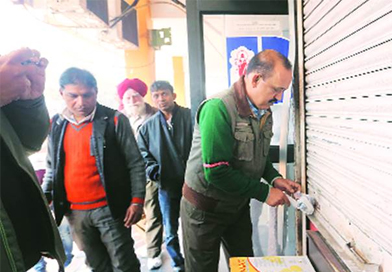 The recent sealing drive in Delhi markets has pulled out the cash from traders and helped the South Delhi Municipal Corporation (SDMC) to collect Rs.17 crore as “use conversion charge” in just two weeks. The amount is much higher than the average collection made by the civic body in a month, which is Rs.7.7 crore.

To prevent the shops from sealing, shopkeepers from various markets in South Delhi have come forward to pay the due charges to prevent sealing after the upper floors of 51 shops and restaurants in Defence Colony were locked down by SDMC on December 22 last year.

The civic body, after receiving directions from the Supreme Court-appointed monitoring committee, had asked the traders to pay the conversion charges to get access to the sealed portions.

Further, to give relief to traders on roads notified as commercial roads, pedestrian shopping streets and mixed land use roads (under MPD 2021) in South Delhi, the area’s civic body on January 4 also started waiving off interest and penalty for property owners who pay in lump sum the conversion and parking charges, as applicable from 2007.

Speaking on the situation, Shikha Rai, leader of house, SDMC, said, “These measures motivated shopkeepers in local markets as well as markets on notified commercial roads (as per Delhi Master Plan 2021) to pay the one-time ‘use conversion charge’ and yearly ‘conversion charge’.”

“The amount of Rs.17 crore has been collected between December 22 and January 8. Of the total collection, the maximum amount has been received from traders in SDMC’s central zone. It includes markets such as Lajpat Nagar, Jangpura, Amar Colony and South Extension,” she further added.

The department has received almost Rs.6.18 crore from the central zone, Rs 5.72 crore from the south zone, Rs.4.6 crore from the west zone and Rs.91 lakh from the Najafgarh zone between December 22 and January 8 as conversion charges.