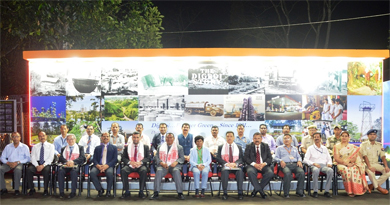 The OPEC delegation was given a guided tour of the Digboi Centenary Museum with a detailed brief about the incredible facts that led to the discovery of oil in the remote corner of India in the late 19th century.

The delegates went around the refinery, which included pit-stops at the 1928 vintage Wax Moulding Shed and the historic ‘Still’ used to treat crude oil.

When asked about his visit to Digboi, Dr. Barkindo said that Digboi was a name he had heard many times since his student days. “And now a dream is fulfilled finally as I have the distinct honour and privilege to visit the birthplace of the oil industry that fuelled the current civilization and will continue to do so in the foreseeable future,” he said. “I congratulate the management of Indian Oil, Digboi and the Government of India for preserving this prized history.”