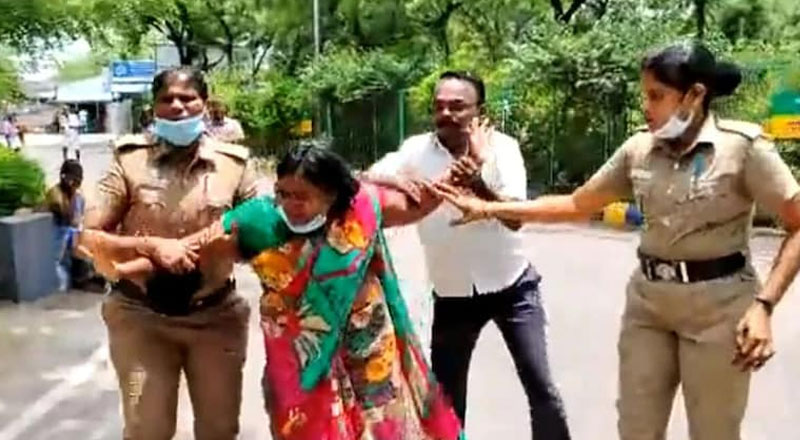 A woman attempted self-immolation in Tamil Nadu’s Virudhunagar after her daughter was allegedly sexually abused by a local leader’s son and the authorities failed to take action. India Today visited the region and spoke to the complainant, accused and the police.

On April 25, a woman tried to immolate herself outside the district collector’s office in Virudhunagar of Tamil Nadu.

the local panchayat president’s son. Further, she said that she and her husband were abused, beaten up and even stripped by the panchayat chief’s family.

The woman said that she attempted self-immolation because the authorities had taken no action in the case as the accused were connected to the ruling DMK. The incident has triggered a political blame game in the state.

India Today’s team visited Virudhunagar in Tamil Nadu to speak to the complainant, the accused and the authorities. Here’s what they all had to say.

Speaking to India Today, the woman narrated, “We found that Sulaiman [panchayat president’s son] was torturing my daughter. We had warned them multiple times before but we found that Sulaiman had brought a phone for my daughter and was harassing her. We took the phone and went to give it to them. At that time, Senthamarai [panchayat president] and his family members were all talking. We gave the phone back and asked them not to torture my child. They started abusing us.”

She also alleged that Senthamarai was using his political influence over the police to get away with what the family had done. The police, however, have denied this.

Meanwhile, Virudhunagar Superintendent of Police M Manohar said, “The police are taking very serious action in cases of violence against women. We have managed to secure custody of two accused who allegedly stripped the lady. One is absconding and the search is on. His mobile phone is switched off and the police team is conducting a vigorous search.”

He added, “The court has granted anticipatory bail to five of them.

the other side of the story. There, we met panchayat president Senthamarai who had gone into hiding after the case surfaced.

He denied all the charges levied against him and his family. He said, “The whole thing is a false allegation. I respect women like my own mother and this is all a politically motivated complaint. If this continues, I will commit suicide.”

“The truth is that the woman’s husband was inebriated and came with a machete to threaten me. My elder brother who heard this hit him and asked him to leave. The woman and my wife had an argument but I was not involved in the fight. In fact, I was the one who called the police first. I even recorded the video of the husband abusing us. An FIR has not been lodged against him,” he said.

He added, “They are saying my youngest son sexually abused the girl but the truth is the two liked each other. They could have spoken and sorted it out but they tried to make it big to politicise the issue.”

He said, “The future of all my children has been spoilt now, they have brought shame to my panchayat, my family and me. I have been working hard for the panchayat. If one of my sons has made a mistake, then file a complaint against him. But here my entire family has been targeted. They are working under the influence of those who contested against me.