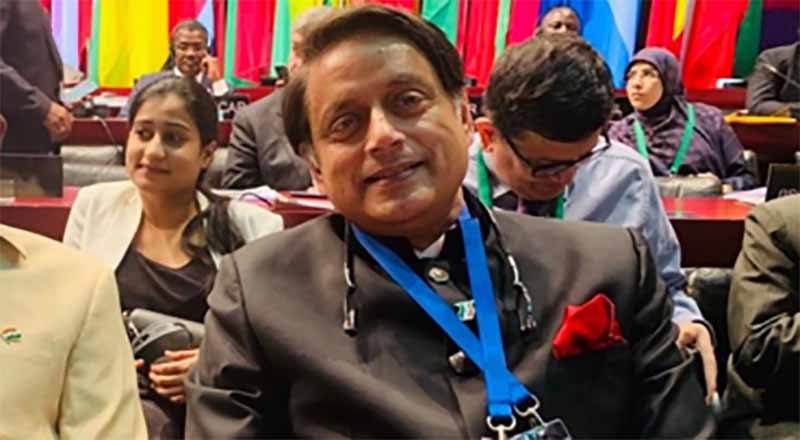 An Indian delegation on Wednesday hit out at Pakistan for raising the Kashmir issue at the Inter-Parliamentary Union (IPU) assembly in Serbia, saying it is ironic that a state responsible for countless terrorist attacks in Jammu and Kashmir is trying to masquerade as a champion of international law.

Speaking for the Indian delegation which was headed by Lok Sabha Speaker Om Birla, Congress MP Shashi Tharoor said Parliament of India will not allow these malicious efforts to succeed. “We expect better from parliamentarians then vituperative mudslinging,” he said.

“The Indian delegation rebutted baseless allegations of the Pakistani delegation about Jammu and Kashmir at two different sessions,” the Lok Sabha secretariat said in a statement and also shared videos of Tharoor’s remarks.

He said that Pakistan had raised an issue internal to India and extraneous to their discussions for narrow political gains. The Indian delegation rejected outright and strongly condemned such references, Tharoor said.

“Madam chairperson I am a member of Parliament from the leading opposition party in India and we will continue to use our Parliament to discuss and debate with our government on Kashmir and other issues. We will fight our own battles democratically and don’t need or welcome interference from across the border,” he said.

#WATCH Congress MP Shashi Tharoor slams Pakistan at 141st Assembly of Inter Parliamentary Union, in Belgrade, says, “…It is ironic that the state(Pak) responsible for inflicting countless cross border terrorist attacks on J&K is trying to masquerade as a champion of int’l law.”

Tharoor also said, “The statement that we heard from the Pakistani diplomat today is indistinctly unhelpful.”

“Pakistan is the only government in the world that provides a pension to an individual listed by the United Nations in the Al Qaeda sanctions list. Pakistan is home to 130 UN-designated terrorists and 25 terrorist entities listed by the UN. It is frankly absurd to hear fulminations about respect for human rights from representative of such a state when terrorism is the worst possible destroyer of human rights,” he said.

Tharoor said the Indian delegation hoped that the Pakistani delegation from Pakistan would refrain from misusing the forum again and in collective interests of the parliaments of the world focus on serious issues that are under discussion at the IPU assembly.

The Indian parliamentary delegation is in Serbia’s Belgrade city to attend the 141st assembly of the Inter-Parliamentary Union (IPU) to be held from October 13-17.