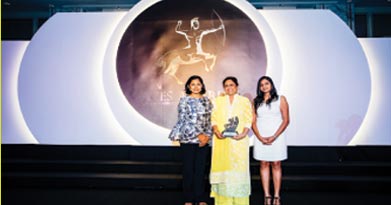 The award has been won under Community Care Category for working in the vertical of Education, Livelihood Promotion, Community Healthcare & Infrastructure, Environment & Resource Protection and Care for Persons with Disability.

The organizing committee of this event was MORS Group. After a 3 month long due diligence at the plant premises of its Business Group Company – PTMAI, the organizing committee testified SMF as a worthy recipient of the title with holding the regional benchmark of this award. A total of 44 out of 187 countries were awarded.

The ACES Awards seek to offer an ideal platform for leaders to take pride of the leadership excellence, to learn, to build connections, and exchange new ideas while MORS Group continues to showcase Asia’s best practices for sustainable growth.

During the ceremony, a select few top entrepreneurs were also honored for their achievements, some of these are TCS, ING Vyasya, Vedanta etc.

On 18th January, 2017 Spark Minda Foundation took a step forward and distributed 400 blankets which would help less privileged people to fight the chilling winter and get some peaceful sleep at night.

The event was enthusiastically participated by the Spark Minda, Ashok Minda Group employees and some volunteers from SOIL.