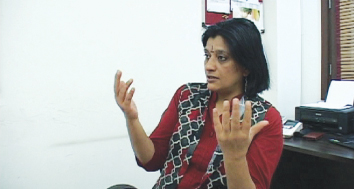 In a chit-chat with Dr. Shubhangi Sharma, Executive Director, IPLM, NASSCOM Foundation, she shares with SPO India of the contributions that IPLM is making to revive the public libraries in India that lie in a deplorable condition today and the feedback it has been receiving by having partnered with the state and the federal governments

There are more about 70000 public libraries in India, which again is an unestimated figure. Another estimation puts the figure at 1 lakh+ libraries in India which are at all levels – beginning at the state level, district level, block level, village level; the number is that huge. But despite being situated probably in one of the best architectural set ups in the country remain in a dire state of deprivation.

“During the course of IPLM implementation, I have travelled across the country and what I have seen is that there is nobody who is actually concerned about how these public libraries look and how they should be looking in future. I would not say that there are no efforts from the govt.’s side. It has started very interesting initiatives for resurrection and transformation of public libraries. There is a nodal agency squarely to work for public libraries which is called RAJA RAMMOHUN ROY LIBRARY FOUNDATION set up by Ministry of Culture. Then there is National Mission on Libraries. Their initiatives are going on in the area of digitalization of knowledge resources and setting up of virtual libraries. But the point here is that, all these efforts despite sincerity in their approach and vision are yet to yield results,” says Dr. Shubhangi Sharma, Executive Director – IPLM, NASSCOM Foundation.

“This is the reason we need to probably rethink about the new role of a public library. We need to create it as a kind of place where we can undertake new services and activities for the readers. Services can be introduced by corporates. For instance, if you are working in Skill India, probably library could be a place for you to inform young population about what kind of skill programs are there. Library can also be used for career counseling or for a lot of knowledge dissemination services about govt programs. But for this we require a lot of fund and resources. But having said that, I can say that there is no limitation of fund as such, if we may talk about the provisions of RRRLF and National Mission of Library. The govt. has tried to provide funds which are adequate in nature. The librarian and the library are to be capacitated, to be able to receive those funds and put those funds in use in a manner in which communities are able to make use of services which are offered using those funds. The librarian needs to prepare a proposal, put across a budget, and articulate it in a manner in which the fund should be coming to his way in his public library,” she says.

There is a requirement of fund for a host of new services. But alongside, there is enough funds provided by the ministry and in some states even the state Govts are providing reseaonable funds.

IPLM is a movement, and not just an initiative, according to Dr. Shubhangi. “When we say a movement, it cannot be just one organization or one individual. It has to have participation from across. So there has to be a lot of organizations, lot of individuals, agencies, govt. and private sector players who need to combine their efforts to make sure that a movement gets built up. The first part of IPLM is that it is an effort of a host of an organization and agencies who are interested in such movement being flourished in India and it is part of the global public library movement,” she says.

Across the globe there is a movement going on which is geared towards transformation of public library and this movement started by IPLM is part of that larger movement. I other words, IPLM is trying to transform the public libraries into a vibrant and inclusive knowledge spaces. But for this the system has to change for any reform to be brought about in a country like India. There is the need for govt. participation and how govt. would be interested to participate in.

“Now every public library has librarian and library staffs. So in our understanding they are a cadre whose capacity needs to be built so that they are able to serve better. We are doing a lot of things to train the librarian on diverse dimensions of responsibilities, which include engaging with the community, partnering with the corporate organization, understanding community needs, interacting with children and women. We are also trying to see of what we can offer through library space which will bring the disabled people more in the library space.

Secondly, we are also supporting the librarian to implement a lot of services in the public library space which probably we never thought about hitherto. Like libraries are now providing online school education content, so that children after school come to the library space rather than going to the coaching centers that supplement their education. We are also trying to provide tele-health consultation,” explains Dr Shubhangi.

Across libraries in India, there is no system of monitoring or evaluation and IPLM feels that there has to be robust monitoring in which the result of the kind of the services offered in the public library space can be monitored; things like what kind of the people are coming to the library, what kind of information they are using and so on. IPLM is thus trying to build up a robust system for the public library.

IPLM has already started doing that in about 25 states. It is a pan India movement, however resources are limited. It proposes to create model by judiciously using those resources and accordingly selecting 100 district libraries across these 25 states. “We are working with incredible MS Swaminathan foundation in Chennai, P N Panicker Foundation in Kerala, which are very well known organization when it comes to community engagement, understanding the community requirement and being able to deliver those services,” she says.

IPLM is hosted by NASSCOM foundation and the foundation is committed to bringing in democratization of information and ensuring equity and inclusion through usage of technology. The very key ingredient of the movement is to provide for public access computers, because it feels that until and unless it is able to make such a provision, IPLM would not able to bring in people from all communities and societies to the knowledge space. So as part of the IPLM intervention, across 106 districts and libraries, IPLM is going to provide for public access computers which would be easily accessible. “So they will be kept at a place in the public library where they can be accessible to the public or anybody to get the information which the person requires. The 2nd part of our technological inclusion is that many of things like setting up of online knowledge space, providing online education content, conducting tele-health consultation services, all these things are done making proper use of technology, computers and other devices in the public library space,” concludes Dr Shubhangi.