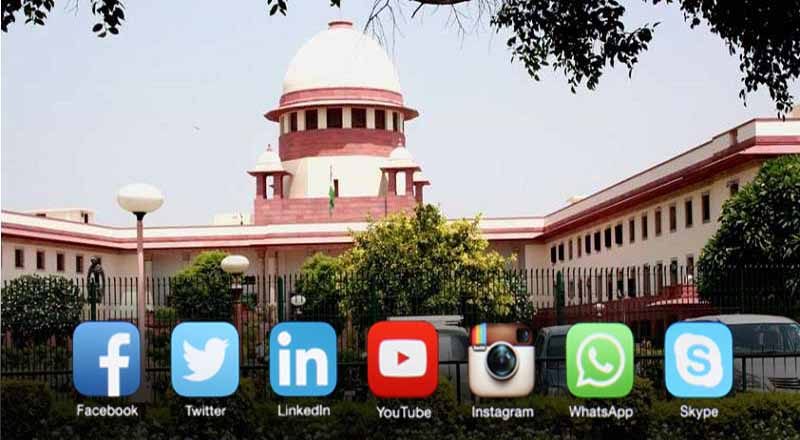 A bench of Justices Deepak Gupta and Aniruddha Bose said,the government must step in now. The top court had earlier asked the Centre to clarify whether it was contemplating forming guidelines or a framework for linking social media accounts of users with their 12-digit biometric unique identifier Aadhaar.

In a petition filled in the Tamil Nadu government recorded in the reply, to the transfer petition had claimed that Facebook Inc. and other social media companies were not complying with Indian laws, resulting in “increased lawlessness” and difficulties in “detecting crimes”.

A subject matter expert says, Why the Government is not able to take strict action against Facebook and other social media, for meeting the compliance of the country. They should have banned to operate. Requested not to be named.

It had sought modification of the August 20 order of the apex court directing the Madras High Court to continue hearing pleas for linking social media profiles with Aadhaar but restraining it from passing any orders. The high court is at an advanced stage of hearing but due to the apex court’s August 20 order. However, it deferred the hearing on those petitions, the state government had said.

Referring to different criminal cases, the state government had said local law enforcement authorities have attempted to seek information from these companies for investigation and detection of crimes on several occasions. It had said, that these companies ask authorities to send letters rogatory “despite operating on Indian soil” and have in all cases “failed to provide complete information”. IT ACT 2000 has the provision to apply for offence or contravention committed outside India, but has rarely been implemented due to territorial, cross boundary and ethnic jurisdiction. This has resulted in fewer convictions in matters related to cyber-crimes.

In Box: Want to Go Back to Feature Phone, Says SC Judge as Court Seeks Guidelines to Regulate Social Media

Supreme Court judge Deepak Gupta wants to go back to feature phones. And Solicitor General Tushar Mehta thinks that leaving smartphones could actually be a good idea. The reason? Both feel technology has made it dangerous to use smartphones. The court has taken the right cognizance as evidences in the social media can be created and presented as an admissible document under Section 65 (B). Most of the social media service providers don’t co-operate by harping on their disclaimer policy and since their servers are located outside India, they are not compelled to provide the relevant information for speedy trial leading to conviction and providing justice to innocent victims. The social media has now become a big bane and hence has to be properly regulated.

Another expert says, what is the issue that we are not able to bring a strengthen law for the all social media companies including WhatApp, Facebook, Twitter, Instagram, YouTube, Linkedin and others. They simply take our data and do whatever way they like. They have been fined by many countries including their homeland country USA. The IT ACT 2000 was last amended in 2008 and most of the provisions in the ACT has to be modified to suit the current trends in the IT world. Most of the offences are bailable in nature giving immunity to criminals.

It is time to regulate the Social Media, by underscoring the risk of unregulated social media, there is sense of urgency of bring the law, else will be very late.

Secondly,“It is dangerous how some of these technologies work. I was thinking of giving up my smartphone and going back to feature phones,” said Justice Gupta.

Neither the apex court nor the high court is competent to decide this scientific issue and it is for the government to come up with appropriate guideline to deal with these issues, the bench said.

Another, subject matter expert says, in no cost the 12-digit biometric unique identifier Aadhaar to connect the social media. It is just like jumping from the frying pan to the Fire. On the record, the apex court had earlier asked the Centre to clarify whether it was contemplating forming guidelines or a framework for linking social media accounts of users with their Aadhaar card number. The court had said the matter, to help trace the originator of a content, needs to be decided at the earliest. It will never help rather create more problem, which will be out of the control. There is a need for an agency to be appointed by the Government to check for the authenticity of social networking apps. Sufficient awareness has to be created among the users, so that they are made to understand the nuances of technology and the darker space in the cyber world.

In Box: A bench of justices Deepak Gupta and Aniruddha Bose expressed serious concern over some social media platforms. The bench said it is for the government to come up with appropriate guideline to deal with these issues.

Social networking’s tremendous growth has created a breeding ground for hackers to engage in cybercrime.

The growing use of social media, now estimated to be more than three billion users worldwide, provides fertile ground for hackers looking to commit cybercrime. Cybercrime is an easy way to target people because it requires only a computer, an internet connection, and criminal intent. The Government has to build adequate and robust forensic labs to cater to the evidences extracted from digital devices. The present scenario is precarious as many labs in the country are not authenticated as an electronic examiner labs, leaving a serious question on the justice meted to the victims.

· 3.26 billion people use social media on mobile devices in January 2019, with growth of 297 million new users representing a year-on-year increase of more than 10 percent

A University of Surrey in the UK, detailed all of the various tactics – ranging from crypto jacking to botnets for hire – used by cyber criminals around the world to earn nearly $3.25 billion annually by exploiting popular social platforms.

However, social media cyber crime is more cleverly disguised. For example, small advertisements for big-name consumer brands on YouTube might actually be malware delivery vehicles for crypto jacking schemes and invitations to take part in get-rich-quick online scams might actually be a clever form of money laundering.

Social media cyber crime involves the illicit trading of personal data from hacked social media accounts. With the regulation, the issue of highly complex cybercrime will also come down. Individuals and enterprises unnecessarily have to spend huge hard earned money to secure their mobile phone, Computer and networks to secure.

There are 1.3 billion people in India who generate a lot of data every day. Anyone from anywhere in the world can capture this data and use it against us.

Lastly, No company in the world is able to come out with a full proof to secure the computer, mobile phone and networks. However, they says we can secure upto 99.99, that .001 percent can brings lots of vulnerability.