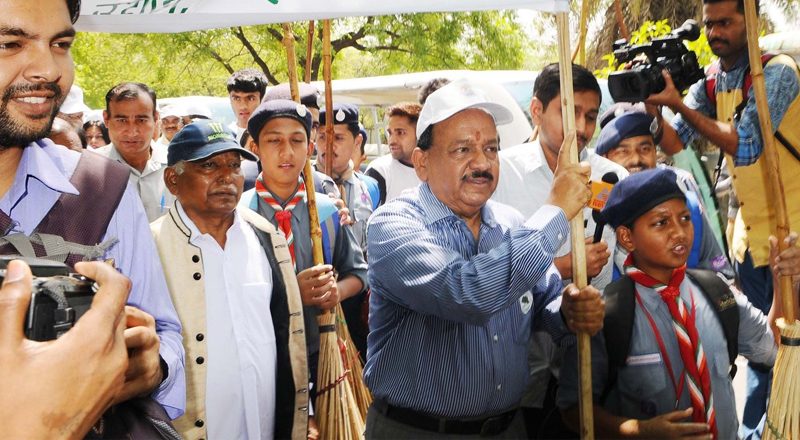 Addressing a large gathering at the concluding function of the Ministry’s Swacchhta Pakhwada at the National Zoological Park in New Delhi, Dr. Harsh Vardhan said that the Ministry will publicise such environment-friendly acts with the people of the country. “35 senior officers of the Ministry of Environment, Forest and Climate Change will work in the campaign together to galvanise it into a peoples’ movement and take the Swacchhta Abhiyaan to 125 crore people of the nation. The officers will involve State forest officers, officials from other institutions under the Ministry, school and college students, scouts and guides, NSS and common people.”

The Minister referred to the Prime Minister, Shri Narendra Modi’s vision of delivering a New India by the year 2022 and added that though Swacchhta Pakhwada will concludes, the spirit of the campaign will continue uninterrupted throughout the year.

Dr. Harsh Vardhan emphasised that today, when the entire world discusses issues related to climate change, global warming and environment protection, it looks with hope towards India. “The world believes that India’s culture and philosophy possesses the inspiration and energy, which can spell welfare of the entire mankind.”

Swacchta Pakhwada has been organised at the National Zoological Park to celebrate the birth of a baby hippopotamus in the Zoo.

As part of Swacchhta Pakhwada, several activities including tree plantation, ‘Shram Daan’ and cleaning of waste were undertaken in Noida on June 9, at Lodhi Garden on June 12, Indraprastha Park on June 13 and Nehru Park on June 14. Another feature of Swacchhta Pakhwada includes cleaning of four railway stations by the Science Express Climate Action Special train, which is presently running in the states of Andhra Pradesh and Karnataka. Some of the prominent themes of Swacchta Pakhwada include – Plastic free Tiger Reserve/Protected Areas/National Parks, under which all tiger reserves shall ensure cleanliness and be declared plastic free by 2018.