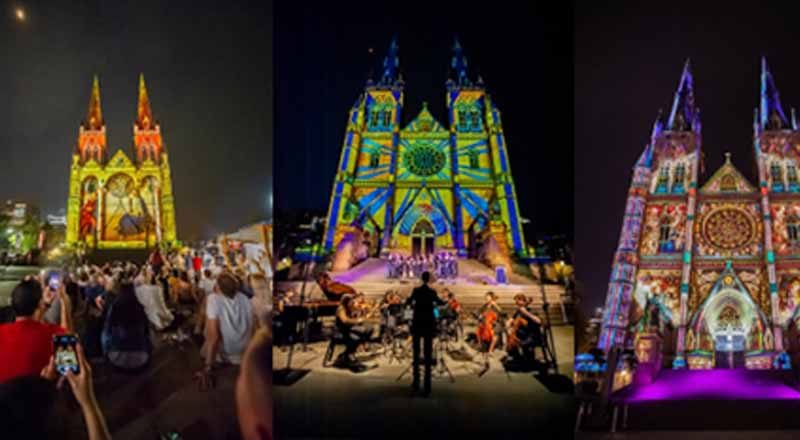 For many of those who observe Christmas, the ritual – doing the same thing every year – is an enormous part of the appeal. It’s what we look forward to. Those celebrating Christmas in Sydney, Australia are delighted that, for the tenth year in a row, AGB Events has produced its Lights of Christmas spectacular. It has become a Sydney tradition, and a much-anticipated event for families throughout the city – and beyond. For many, the Christmas season doesn’t start until Lights of Christmas are on.

The first Lights of Christmas was established by AGB Events in 2010 with the support of the NSW State Government. Throughout its existence, it has reflected the reality of an Australian Christmas – an imaginative representation of what Christmas means to Sydneysiders – so, none of the snow or reindeer that characterise the festival in the northern hemisphere. Instead, Lights of Christmas focuses on themes that are central to the celebration: love, sharing, hope, warmth, friendship, the importance of helping others – all illustrated with compelling kaleidoscopes of light and colour.

“We take great pride in creating meaningful and memorable public celebrations that draw communities together so successfully that they become an integral part of the cultural landscape,” said Anthony Bastic, CEO and Creative Director of AGB Events. “That’s what Lights of Christmas has become.”

“While it’s a unique event, Lights of Christmas is representative of the kind of events we’ve created for governments and city/state councils around the world – not just Australia, but the United States, Europe and Asia – on many occasions, and many of them have become annual fixtures,” continued Anthony. “What we do is to create public events that contribute to the cultural fabric of a city and that use light and sound, digital storytelling and cutting-edge audiovisual equipment from leading suppliers to engage a diverse range of community groups.”

Lights of Christmas presented by Paynter Dixon and created and produced by AGB Events, returned to St Mary’s Cathedral from Thursday 5 December 2019 until Christmas night. It saw AGB Events once again using the iconic St. Mary’s Cathedral as its 75-metre high backdrop to deliver ‘Ascension’, drawing on the principles of religious architecture and depicting the Christmas story through a series of dioramas drawn from exquisite early Renaissance artworks. Giles Westley at AGB Events lead the design team to create ‘Ascension’. The animated images featured 9 million pixels and 256,000 lumens of brightness on the cathedral’s sandstone façade with all high performance digital video projection technology and expertise provided by TDC – Technical Direction Company. The visuals are accompanied for an hour each evening by a specially-commissioned soundtrack from the St. Mary’s Cathedral Choir.

Previous themes have included ‘Peace, Good Will and Wisdom’, ‘Unity’, ‘The Joy of Giving’ and, for the United Nations International Year of Light in 2015, ‘Light is Life’.

“All of our projects centre on brilliant illuminations, often using buildings, whole streets – or even, as we did for Halo at Townsville, a mountain range – as backdrops, and are made possible by the incredible creativity and imagination of our design team in combining art, architecture, geometry, design, photography, and digital animation to create compelling, memorable and culturally relevant experiences that make a difference to those who witness them,” concluded Anthony.