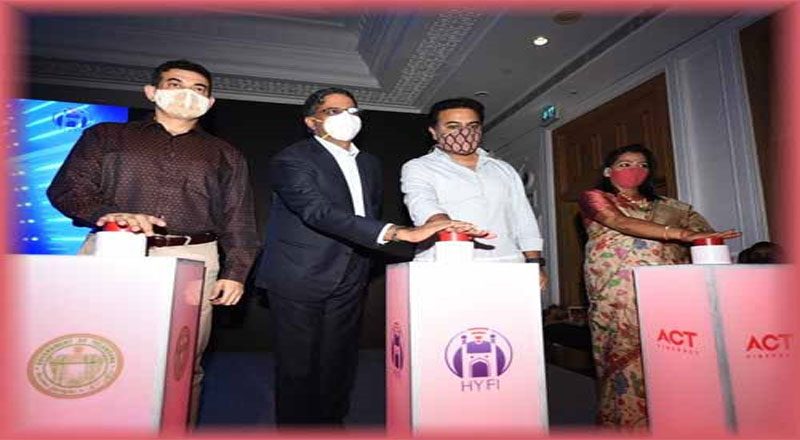 In its efforts towards further accelerating ‘Digital Telangana’, Government of Telangana commemorated 3000+ public Wi-Fi hotspots in Hyderabad as part of the Hy-Fi project in collaboration with ACT Fibernet. Launched in the presence of K. T. Rama Rao, Minister for Municipal Administration & Urban Development, Industries, and IT & Commerce, Govt. of Telangana, Jayesh Rajan, Principal Secretary of the Industries & Commerce (I&C) and Information Technology (IT) Departments of the Telangana government, Bala Malladi, Chief Executive Officer, Atria Convergence Technologies Ltd and other dignitaries, and officials.

With this launch, Hyderabad becomes one of the first cities in India to deploy public wi-fi network at such a large scale.

Each of the 3000 Wi-Fi hotspots are powered by ACT SmartFiber Technology, which will ensure superfast and safe internet experience. This technology enables users with smooth, seamless connectivity for video content, including calling, streaming, and ultra-fast file transfers on ACT’s Gigabit-enabled network at scale. With implementation of the SmartFiber technology, a study by InMobi in April 2021 has concluded that in addition to being the largest ISP in Hyderabad, ACT is also the fastest service provider in Hyderabad, and the best broadband for streaming.

Users will have to login through “ACT Free Hy-Fi” portal with their phone number and use free internet for 45 mins at 25 Mbps speed and 1 GB data limit without any cost and can also top up further as and when needed. Existing customers of ACT, when they login with their ACT credentials, will get their current home broadband speeds. For example, if the customer has a 100 Mbps plan at home, he will get 100 Mbps speeds when he logs into wi-fi hotspot. These hotspots are located across the city in malls, hospitals, public parks, metro stations, public libraries, metro stations, educations institutions etc. for easy access.

K. T. Rama Rao, Minister for Municipal Administration & Urban Development, Industries, and IT & Commerce, Govt. of Telangana, said, “Hyderabad has been rated as one of the best cities in the world by several studies. The 3000 active hotspots now make Hyderabad a truly global smart city. I am happy that a great number of people will now be able to enjoy free internet and make good use of it. ACT Fibernet has been a trusted industry partner for many years, and I thank them for their support to expand the Hy-Fi project.”

Jayesh Ranjan, Principal Secretary for IT, Industries and Commerce, Govt. of Telangana, said, “Hyderabad now has the largest active public free wi-fi network which can be accessed in most of the public locations. Through Hy-Fi, all of Hyderabad can now connect to the internet free of cost and benefit from the opportunities that the digital world provides.”

Bala Malladi, CEO Atria Convergence Technologies (ACT), said, “ACT Fibernet has always believed in leveraging internet connectivity as a force of good – to enable social transformations. The free public Wi-fi will help bridge the digital divide, be it for students, health workers or even the general public. It is an honour to be part of this prestigious project by government of Telangana and do our bit for the citizens of Hyderabad “

With the government’s constant push on ‘Digital India’ and making the internet affordable for all, internet penetration is set to reach newer heights in coming years. ACT Fibernet has been a catalyst to drive adoption of fiber broadband internet In India since 2000 and is the largest ISP in Hyderabad and one of the largest in India.