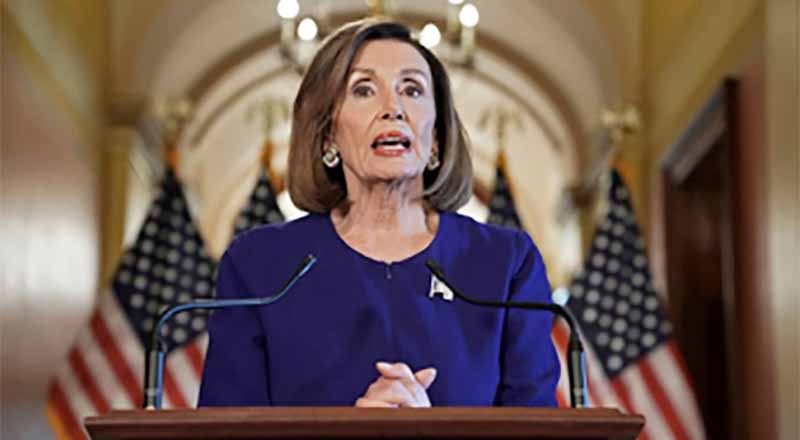 The Trump-Ukraine phone call is part of the whistle-blower’s complaint that was released recently.

Nancy Pelosi, the Speaker of the House, had given the game away, saying that she would be making an announcement later. “I’ve told people, as soon as we have the facts, we’re ready,” Pelosi said, in response to a question about whether, in view of the allegation that Donald Trump pressured the President of Ukraine to investigate Joe Biden, she and her caucus were ready to go ahead with an impeachment inquiry. “Now that we have the facts, we’re ready-for later today.”

In her subsequent public statement, Pelosi began by running through the history of the Ukraine story, which emerged after an anonymous intelligence official filed a whistle-blower complaint that the Trump Administration has refused to turn over to Congress. Then she got to the point. “This week, the President has admitted to asking the President of Ukraine to take actions that would benefit him politically,” she said. “The actions of the Trump Presidency reveal the dishonorable fact of the President’s betrayal of his oath of office, betrayal of our national security, and betrayal of the integrity of our election. Therefore, today, I am announcing the House of Representatives is moving forward with an official impeachment inquiry. The President must be held accountable. No one is above the law.” As per NewYork Times report.

The announcement came amid reports that Trump may have abused his presidential powers and sought help from a foreign government to undermine former Vice President Joe Biden, the current Democratic frontrunner, and help his own re-election.

In a summer phone call with Ukrainian President Volodymyr Zelensky Trump asked for help investigating Biden, according to a White House-released summary of the call. In the days before the call, Trump ordered advisers to freeze $400m in military aid for Ukraine – prompting speculation that he was holding out the money as leverage for information on Biden. Trump has denied that charge but acknowledged he blocked the funds, later released.

With the Ukraine story broke, thirty-five per cent of respondents expressed support for the House opening impeachment proceedings, and fifty per cent said they didn’t support it. Opinion was divided sharply along party lines, with seventy per cent of Democrats supporting the idea but only thirty-one per cent of Independents and six per cent of Republicans in favor.

President Trump addressed the U.N. hours before Democrats opened an impeachment inquiry into reports that he pressured the President of Ukraine to investigate matters related to Joe Biden.

Now, there are Six congressional committees will proceed with impeachment investigations. “The President must be held accountable. No one is above the law,” she said. Trump heard the news as he met with the Iraqi President, Barham Salih, in the afternoon. He insisted that he had done nothing wrong during a July 25th phone call with President Volodymyr Zelensky, of Ukraine, in which Trump reportedly pressured Zelensky to investigate matters related to former Vice-President Joe Biden. “How can you do this and you haven’t even seen the phone call?” he told reporters. “Listen, it’s just a continuation of the witch hunt. Our country’s doing the best it’s ever done. They’re going to lose the election.”

William Burns, the former U.S. Ambassador to Russia and now the president of the Carnegie Endowment for International Peace, said that Trump may have gone further than any previous President in abusing both executive power and the tools of American diplomacy. “If it’s true that President Trump leveraged U.S. assistance to get Ukraine’s leadership to go after a political opponent, it would be an unprecedented abuse of power and an enormous blow to American diplomacy—which is premised on advancing the national interest, not the individual interest of our President,” he told me.