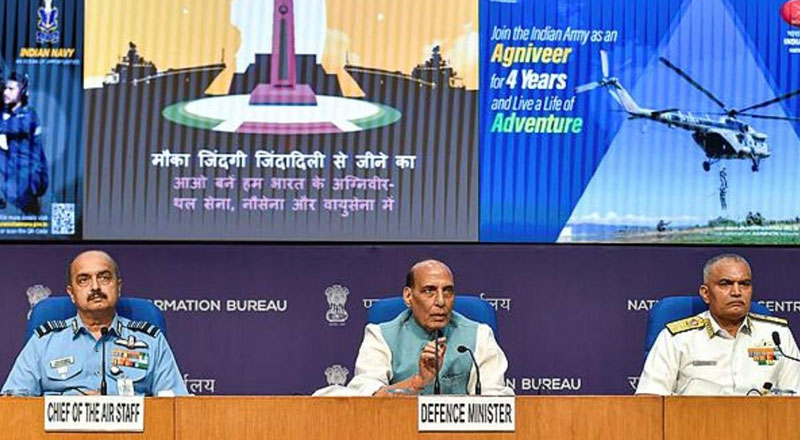 Defence Minister Rajnath Singh has announced a new recruitment policy for troops in the Indian Armed forces. Called Agnipath scheme, it will allow women to be inducted and change composition of certain British-era regiments of the Indian Army which have only youth from specific castes.

The Minister during the announcement was flanked by the three service chiefs from Army, Navy and Air Force.

Recruitment of troops in the Indian Army has been suspended for two years and will re-start in 90 days from now.

The Agnipath scheme will entail induction of troops into the Army, the Air Force and the Navy for a duration of four years as jawans, airmen and sailors, respectively. In the first phase, some 46,000 youth in the age group of 17.5 years to 21 years will be recruited for a period of four years in the three services.

“The Agniveers (name for those recruited under the scheme) would form a distinct rank in the Armed Forces, different from any other existing ranks,” the Ministry of Defence stated.

Those exiting after four years will have a job opportunity in several ministries, and public sector undertakings. Rajnath Singh said that some states have also agreed to take them.

He however dismissed suggestions that the scheme was brought in to cut down on the ballooning pension bill saying, “We are ready to spend any money on the armed forces”.

After completion of four years of services only 25 per cent of those recruited can opt for full tenure. The retaining will be done through a scientific model and centrally-maintained data and will then go on to serve with all benefits that apply to existing troops.

Lt Gen Anil Puri, Additional Secretary of the Department of Military Affairs (DMA), said, “The present average age of troops is 32 years and we will bring it down to 26 years in a few years. We will have savvy youthful forces and make troops future ready. The selection process will be transparent and will also be open to women.”

Those recruited under the ‘Agnipath scheme’ will get a starting monthly salary of Rs 30,000 in the first year. It will go upto Rs 40,000 in the last year. There will also be a contributory severance package called the one time ‘Seva Nidhi’ package and after four years each de-mobilised trooper would receive around Rs 11.76 lakh with interest. All the earnings would be exempt from income tax and there shall be no entitlement to gratuity and pensionary benefits.

Recruits would also be provided with death and disability benefits under the scheme and this includes an insurance cover of Rs 1 crore to family in case of death.

Announcing the biggest change to the Army, Gen Puri said, “This will be All India merit- based selection. In other words, this means the British-era recruiting system based on specific caste regiments will also go away. For now, Sikh regiment, Rajput Regiment, Maratha Regiment or Jat regiment would draw troops from these communities, respectively. In future, regiments could comprise inductees from all India and from all classes. In the past, boys have been recruited from the same gene-pool and from within specific geographical locations. In the older regiments, the system has been working for more than 150 years and in some cases even 200 years.”

Air Force Chief, Air Chief Marshal VR Chaudhari said it has been discussed within the IAF that the youth leaving after four years will be job-ready.

Navy Chief Admiral R Hari Kumar said, “We needed to change with time. Agniveers will be posted on front line warships and submarines.”