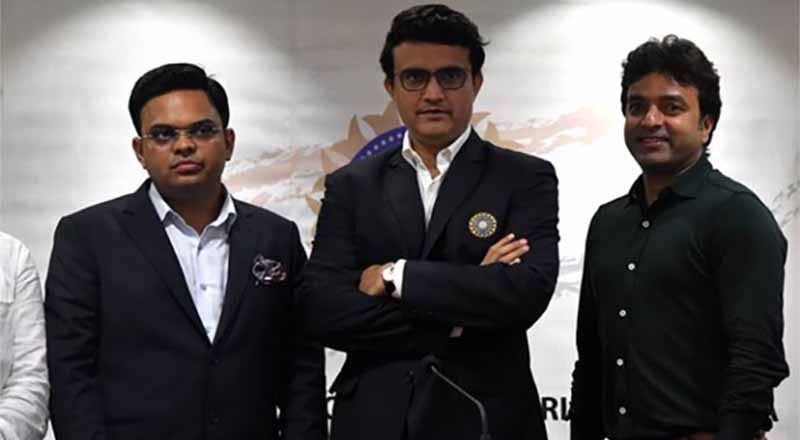 Former Skipper Sourav Ganguly  become the 39th President of BCCI. Amit shah’s son Jay Shah to become a secretary and joins Ganguly’s team. Sourav Ganguly said, that he is pleased to become the frontrunner for the appointment and will be keen to look after the case of the first-class cricketers. The apex cricket board in India is on verge to become a democracy this month following the three years of the Committee of Administrators (CoA) – a four-member panel nominated to take care of the BCCI to implement Lodha Committee reforms.

Ganguly is the nominee from the Cricket Association of Bengal (CAB) and will be contesting the upcoming BCCI elections for the post of the board president. While the former India skipper’s bid for the post is expected to remain unchallenged, ex-India batsman Brijesh Patel is heavily tipped to claim the post of the Indian Premier League (IPL) chairman.

The Board of Control for Cricket in India (BCCI) is the national governing body for cricket in India.[4] The board was formed in December 1928 as a society, registered under the Tamil Nadu Societies Registration Act. It is a consortium of state cricket associations and the state associations select their representatives who in turn elect the BCCI Chief. Its headquarters are in Wankhede Stadium, Mumbai. Grant Govan was its first president and Anthony De Mello its first secretary.

The BCCI is India’s richest sporting body and the richest cricket board in the world. BCCI does not depend on the Government of India for its finances. The global media rights for IPL is awarded to STAR India for ₹16,347.5 crore (US$2.4 billion) from 2018 to 2022.Official kit sponsorship rights for 5 years from 2016 to 2020 inclusive has been awarded to Nike for ₹370 crore (US$54 million).While Oppo became the official Indian cricket team sponsor for a period of five years at a cost of ₹1,079 crore (US$160 million).The media rights for 25 neutral venue one-day matches to be played over the next 5 years were awarded to Zee Telefilms for $219.16 million. BCCI had avoided taxes on its income, claiming exemption as a charitable organisation. Although the Income Tax Department withdrew this exemption in 2007-08, BCCI only paid tax amounting to ₹41.9 crore (US$6.1 million) against its tax liability of ₹413 crore (US$60 million) in the 2009-10 financial year On 12 September 2006 BCCI, announced that it will spend ₹ 1,600 crore over the subsequent one year to upgrade the cricket stadiums around the country. The total amount of tax ₹462.22 crore, which was outstanding as on April 1, 2018, was cleared along with interest in September 2018 but The Department of Revenue has issued a notice for tax evasion to the BCCI. The Department of Revenue has asked the BCCI to pay another outstanding income tax worth Rs 1,303 crore, according to details submitted by the Finance Ministry in Parliament in February, 2019.

The new team of BCCI, Sourav Ganguly, new BCCI President, Jay Shah Secretary and Arun Dhumal will be the treasurer of the BCCI. There was much outrage on twitter following this news, wherein people questioned the credentials of the two individuals related to highly influential politicians.