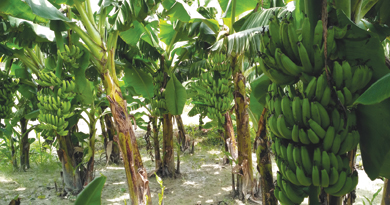 As a rule, the ‘how’ of the matter weighs more than the ‘what’ of the matter. Confusing? Well not really. A simple example makes it clearer: Agriculture is an important sector of the Indian economy. Hence, creative, innovative and cost-effective solutions to the challenges this sector faces are of paramount importance. Of course, some of these solutions are results of painstakingly long research and development processes, some are application of traditional methodologies handed over across generations and some are an amalgamation of both the traditional and the modern.

Farmers in East Champaran, Bihar, have been cultivating traditional crops such as wheat and paddy, alternated with vegetables and mustard since they can recall. The reason being simple: This is what they have always done, so why bother with change? However, the challenges which sprung up over the course of time such as temperamental weather with flooding on one hand and long dry spells on the other, depletion of soil quality due to monoculture and an unorganized trade market have resulted in serious contemplation and change in course of action. The need for diversification, for one, was strongly felt.

Arvind Rana, program leader, Agriculture Interventions, Sehgal Foundation, says, “Understanding the emerging challenge led us to propose the use of banana cultivation, and that too of a special kind – the G 9 variety. This variety boasts of good shape and size, is heavy on productivity, responds well to tissue culture and can be completely ‘eradicated’ if so required. The latter is important as this prevents the growth of unwanted new plants which interfere with the existing sown pattern of crops. Moreover, this variety can be grown with other crops easily and is also a good return on investment. Usually, the variety costs INR 15 per plant. The yield stands at twenty – thirty dozen bananas per tree, with prices slotted at INR 20-30 INR/dozen.”

Of course, the initiative which began as a demonstration now sees many farmers readily contributing towards the procurement of the sapling, which was not the case a few months ago. The eighteen month cycle of yield is also practical and adds to the list of benefits for the farmers. Hence, a simple intervention can enhance the profit for the farmers significantly, with almost no additional or ‘new’ production cost.

Jokhu Sah, village Sitakund, talks about his experience with the intervention. “The first time we got to know about this intervention was during one of the meetings organized by the foundation. Constant hand-holding, at the initial stages, helped us resolve a challenge which cropped up. Usually, I cultivate peas and cauliflower on my field, however, alternating it with banana helped procure extra income due to which I plan to expand the area of banana cultivation. This is not all, the success has inspired others to reap benefits too; where initially doubt reigned, there is now a healthy curiosity and openness to try something new.”

The long-term objective of the intervention is sustainability. “When an intervention is introduced, it is important that it comes with the sustainability tag. Hand-holding is an initial and important aspect, but this has to mature into a self-standing, independent and beneficial long-term model. Otherwise, the point is understandably lost,” adds Rana.
It is also important to understand the apprehensions that come with suggested change. Many farmers do know about the cultivation of banana but the initial step does come with a certain amount of apprehension.

Explains Dinesh Kushwaha, village Amwa, “I did not know about this specific variety of banana – the ‘tissue banana’ or the G9 variety as it is called. Based on the suggestion of the foundation’s field members, I did sow the variety on half an acre of my land, but was nervous about the outcome, which is why I cultivated potato and cauliflower alongside too. The result, however, was very satisfying. I could sell the fruits for about INR 250-300 per plant, which resulted in additional earnings of around 1.5 – 2 lakhs rupees. This, of course, will encourage me to expand the cultivation besides helping me buy machinery. In fact, this option is a great solution for small land owners, as different types of vegetables can also be grown alongside the banana crop.”

Sometimes, innovation is as simple as doing things, stuck in a certain pattern, in a better way. After all, the human mind has a unique ability to learn, unlearn, relearn and apply – the essence of innovation.