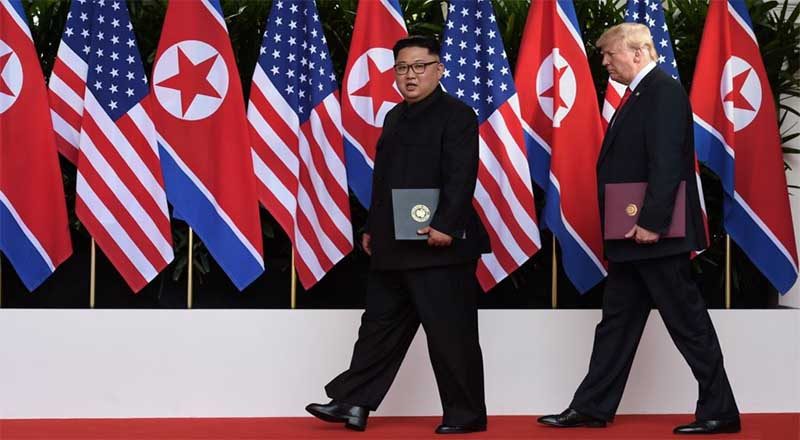 There is a new era of growth is going to witness at the global level, President Trump and Kim Jong, President, North Korea. Trump and Kim signed a two-page statement-big on ideas but slim on specifics-that committed North Korea to “complete denuclearization” and said that the United States would “provide security guarantees” for a country with which it is still technically at war.

“We’re very proud of what took place today,” Trump said, after the two men, appearing relaxed after three rounds of talks, signed the four-point declaration. “I think our whole relationship with North Korea and the Korean Peninsula is going to be a very much different situation than it has been in the past. We both want to do something.” The President said that the world will be “very impressed, very happy” as the two nations take care of “a very dangerous problem for the world.”

Kim chimed in, saying, “We had a very historic meeting and agreed to leave the past behind. The world will see a major change.”Pyongyang’s Korean Central News Agency (KCNA) reported that Trump offered to lift economic sanctions on North Korea.

Trump “expressed his intention to halt the U.S.-South Korea joint military exercises, which the DPRK side regards as provocation, over a period of good-will dialogue between the DPRK and the U.S., offer security guarantees to the DPRK and lift sanctions against it along with advance in improving the mutual relationship through dialogue and negotiation,” it said.

We will be stopping the war games which will save us a tremendous amount of money, unless and until we see the future negotiation is not going along like it should. But we’ll be saving a tremendous amount of money, plus I think it’s very provocative,” Trump said. His announcement was a surprise even to President Moon Jae-in’s government in Seoul, which worked in recent months to help bring about the Trump-Kim summit.

Pyongyang and Beijing are the big winners coming out of the summit, especially because of the limits on U.S. military activities in South Korea. Trump had also suggested earlier that he might draw down U.S. troops, who have been stationed on the Peninsula for seven decades. “Kim got a huge propaganda win and a metric ton of legitimacy,” Denmark said. “Expect North Korean media to replay these images for years, showing how the world respects Kim and that North Korea is now recognized as an equal to the United States and the other great powers of the world. Kim gave up nothing new.” China, North Korea’s main ally and trading partner, got everything that it wanted, too.

At the press conference, Trump said he has extended an invitation to Kim to visit the White House at some “appropriate” time in the future, implying after progress has been made with “denuclearization”-the pivotal concept that’s still not spelled out specifically in the statement. Kim accepted the invitation, the President said, adding, “There’s no limit to what North Korea can achieve if it gives up its nuclear weapons.” The White House prepared a four-minute video to illustrate the potential for Kim-and the alternatives.

A new world could begin as Trump and Kim as “two men, two leaders, one destiny.” The video features high-rise condo units, drones, packed grocery stores, car-assembly plants, and babies in modern incubators. The past does not have to be the future.

Trump said, the President about the North Korean leader, who has executed members of his own family to consolidate power. “Well, he is very talented and anybody that takes over a situation like he did, at twenty-six years of age, and is able to run it, and run it tough.