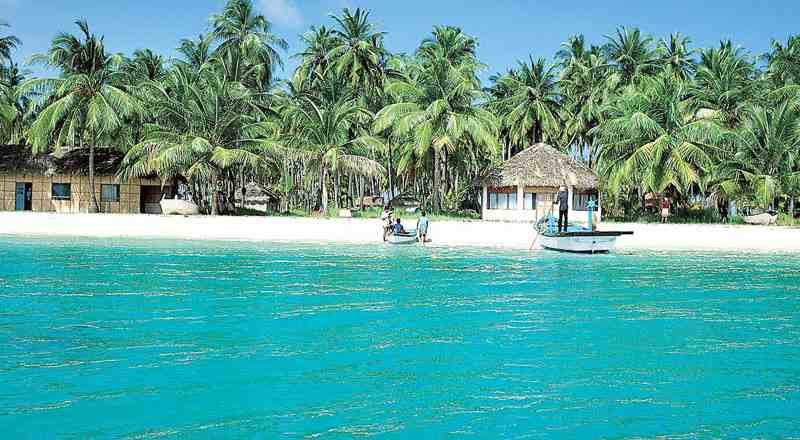 The Union Territory of Lakshadweep is in the news over the orchestrated protests against the draft proposals that the administration has prepared for the all-round development and welfare of the Union Territory (UT). But the protestors, mainly based in the neighbouring Kerala, say that these proposals need to be withdrawn at the earliest the Administrator Praful Khoda Patel recalled.

The most bizarre argument of the protestors is that the UT, which consists of 36 islands (three reefs and six submerged sandy banks) in all, of which, 10 are inhabited and scattered in the Arabian Sea at distance of 220-440 kms of the west coast of Kerala, should not be made a place of tourist attraction like the neighbouring country, the Maldives, despite the fact that the two have the same potentials. Their contention is that as the survival of the Maldives is dependent on tourism, that is important for that country. But small Lakshadweep can survive without tourism. Though they do not say so, the UT survives solely on the central governmental help and aid and they want this state of affairs to continue.

There are other criticisms by the protestors, most of them being perverse interpretation of the facts rather than the facts themselves. I will deal with them a little later. But let me take few more lines on a theory, shared by most politicians in our country, let alone the vested interests represented by a select group of intellectuals, activists and the NGOs. This theory is that we must shun empowering or developmental politics and continue with the politics of entitlement. If people are poor, do not do anything that will not keep them poor. The government’s only job is to ensure that these poor people are fed and kept alive. In other words, it is good politics to promote a parasitical system that encourages people not to become masters of their own destiny and depend on the “Mai-Baap Sarkar”.

Until recently, the electoral politics in India was more or less one-dimensional, concentrating on identity politics and politics of freebies. Things changed a bit after Narendra Modi’s advent; he is the first major politician who asked votes for the pursuit of a range of developmental or empowering goals: self-reliance, food sufficiency, growth, fiscal stability, or checked inflation. Obviously, he has met and meeting resistance from the practitioners of traditional politics, for whom every reform is wrong and every developmental project is a shame. And they are helped in this by the environmental fundamentalists and hardcore communal politicians who believe that the minorities are always right and that they must prevail over others with regard to their narratives.

What one is seeing in Lakshadweep today is the clash between the politics of empowerment and politics of entitlement. And the media is magnifying this clash in communal terms because the population in the UT is essentially constituted by the Muslims.

Against this background, let me point out some of the draft proposals which are nothing but development-oriented. However, the vested interests will not like them to be implemented.

In today’s modern era, it is very important to have net connectivity for the overall development of any region. But even after 73 years of independence, net connectivity is a very big problem in Lakshadweep. Keeping in mind the overall development of Lakshadweep, the Modi government has awarded a submarine optical fiber cable project of Rs 1072 crore, which will be completed by 2023-24. With this, online education, e-medicine and various types of technical facilities will be available here, so that the local people of this place will get new opportunities in the field of education, employment and business.

In Lakshadweep, tourism is one of the few areas that can play a vital role in generating revenue, jobs and overall island growth. Lakshadweep is already recognised as a tourist destination because of its isolated islands and scenic beauty since 1974. Obviously, it needs better connectivity.

Until now, only low capacity aircraft (such as ATR aircraft) were able to land at Agatti airport, due to which national and international tourists could come only in small numbers. The administration has started the process of expansion of Agatti airstrip in collaboration with the Government of India. This will enable high capacity aircrafts such as Boeing and Airbus to land here, which shall facilitate connectivity and promote tourism.

In January 2021, the Ministry of Ports, Shipping and Waterways (MoPSW) began operations of seaplane services, on select routes, under a special purpose vehicle (SPV) framework, through prospective airline operators. The proposed origin-destination pairs include Lakshadweep and Andaman & Nicobar islands. The project execution and implementation would be through Sagarmala Development Company Ltd. (SDCL), which is under the administrative control of the ministry.

Similarly, keeping in view the disaster management, medical facilities and strategic security, the helipad of Kavaratti is being equipped with night landing facilities so that the Coast Guard and Navy choppers will also be able to park and operate from this helipad. Besides, the UT Administration has taken steps to introduce freight from Mangalore port in addition to Kochi to ensure the availability of essential commodities on the islands located at the northern end as these islands are geographically closer to Mangalore Port. The use of this sea route will reduce the navigable distance by about 75 nautical miles and save time of 9 hours, which will also result in a reduction in the cost of freight by about Rs 200 per tonne.

In February 2021, the Minister of Environment, Forest and Climate Change Prakash Javadekar inaugurated the Atal Paryavaran Bhavan, the headquarters for the forest department, under the Lakshadweep Tourism Policy 2020 to promote and develop eco-tourism. In addition, Javadekar issued environmental permits for different eco-tourism projects in the islands of Suheli, Kadmat and Bangaram.

Similarly for promoting agriculture and horticulture in the UT, the government has taken initiatives with various organisations and boards to develop the commercial values of around 10.5 lakh coconut trees on the island and about 10.5 crores coconuts that are produced annually.  This will help the farmers getting their proper value of their production.

Likewise, the government wants to develop the food processing infrastructures in the UT that will preserve approximately 25,000 metric tons of fish that are caught every year, of which 92% is Tuna Fish. Once marketed properly and widely, fishermen will be benefitted immensely.  For economic empowerment and self-reliance of women in the UT, the process has been started to make Lakshadweep, the nation’s largest hub of Seaweed farming through formation of Women Self Help Groups in the Union Territory.

For promoting health and education, there are proposals for setting up of a nursing college and paramedical college in Kavaratti and a polytechnic college in Minicoy so that the youth of these islands are eligible for better jobs.  Hospitals are being constructed in Agatti, Minicoy, Andrott and Kavaratti.

Among the other developmental proposals are promoting green and clean energy, rations to all the islands directly from the Food Corporation of India(at the moment, it comes first to one centralised place  and from there it is distributed to various places, causing avoidable delays) and  opening AMUL  outlets in all the islands.

Obviously building infrastructures require land, and in this regard the government wants to recover lands that are encroached illegally by the powerful vested interests. Predictably, these encroachers, supported by a section of politicians, are making a hue and cry.

Similarly, there is a lot of misplaced noise against the proposed amendment to the Panchayat-Raj system. The misleading propaganda is that a person with more than two children cannot be a candidate in the election, despite the clarification that when this Panchayat Act is notified, its provisions will only apply to the parents of infants born after the due date of notification. In fact, the proposed reforms are for the development, upliftment and empowerment of women as in the UT 50% reservation to women under the Panchayat Act is proposed.

Vested interests deliberately have distorted the proposed cow protection laws. They say that beef is banned and vegetarian food is imposed in the mid-day meals for the school children. Nothing is farther from the truth. As Lakshadweep Collector Asker Ali has clarified, “What is easily available on Lakshadweep are fish items. We have not taken away non-veg from the mid-day meals in schools and are providing fish and egg items. This is because it is easily available during the present lockdown period.”  As regards the ban on the beef, what is proposed is already in force in many parts of the country, and that is against illegal slaughter, transportation and business of cows. “Only those who are associated with its illegal business and those who have personal interests are propagating against this legislation”, says Ali.

One cannot understand why there should be protests over the proposals for stern measures against the anti-social and criminal elements and measures for enhancing national security.  All told, the UT, because of its strategic location, is very crucial for national security, particularly illegal trafficking of drugs and arms. Then there is the factor of the growth Wahabi fundamentalism that is being propagated and promoted by the Islamists in West Asia, Afghanistan and Pakistan.

As G Shreekumar Menon, IRS, (Rtd), former Director General, National Academy of Customs Indirect Taxes and Narcotics, has pointed out, “The value of the drugs seized just during the period November 2020 to March 31st 2021 is a whopping Rs.5000 crores! Compare this figure with the annual Budget allocation for 2021-22 for Lakshadweep which is Rs.1349.71 crores. Almost three times the annual budget is the value of drug trafficking for a period of just 5 months. Within a limited surface area of around 32 km, the drug trafficking turnover is around Rs.5000 crores. Add to this the value and quantum of fire arms seized; everything adds up to an astronomical figure. With this kind of hush-hush money being generated, Hawala and money laundering should also be happening on a large scale.  The hitherto cocooned archipelago is suddenly in the spotlight, as its dark underbelly is exposed. No wonder that an orchestrated campaign has been quickly set in motion to ‘save Lakshadweep’.”

Similarly, Cmde Udai Rao (retd) has rightly argued, “Post 26/11, there has been a perception in the minds of security agencies that terrorist organisations such as the Lashkar-e-Toiba (LeT) and Jaish-e-Mohammed could exploit the religious sentiments of some disgruntled Lakshadweep residents and utilise one or more islands as bases to launch attacks on mainland India….. Maldives, which is about 564 km south of Minicoy, is unfortunately already in the grip of Saudi Arabia-funded Wahabism and Pakistan-sponsored radicalisation, which is a cause of grave concern.”

Viewed thus, it can be argued that the grounds of protests are the imaginations, not realities. But then, it has been the standard practice of the status-quoists and those who have excelled in pursuing the politics of entitlement.  It is high time that these practitioners are ignored.: Uday India

The country’s foreign exchange reserves rose by $1.19 billion to reach $582.4 billion as per the RBI data. The reserves

There was a strong business case to buy spectrum says, Ravi Shankar Prasad

"What factors brought the deadly second wave of Covid-19 in India and what did India miss?"

The proclaimed thug and so called  Dera Sacha Sauda chief, who is at present serving a 20-year prison sentence for raping

Why the Serum Institute chief has to leave the country?