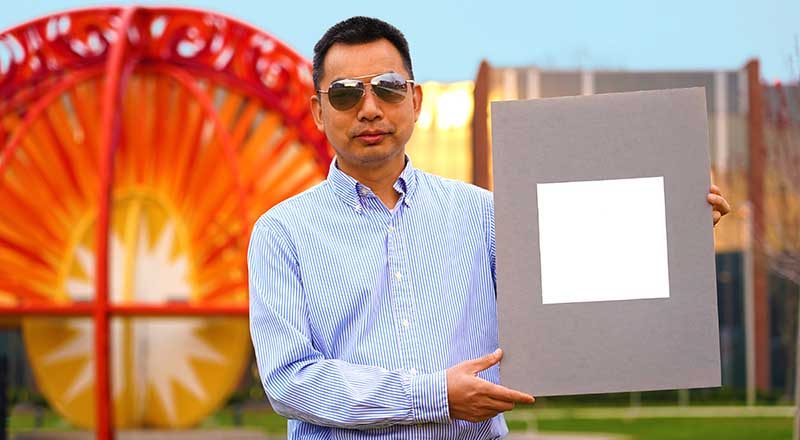 Scientists at Purdue University have developed the whitest-ever paint as a way to tackle global warming by reducing the need for air conditioning. The new paint reflects 98% of sunlight as well as radiating infrared heat through the atmosphere into space. In tests, it cooled surfaces by 4.5°C below the ambient temperature, even in strong sunlight.

In an effort to curb the global warming, Purdue University engineers have created the whitest paint yet. Coating buildings with this paint may one day cool them off enough to reduce the need for air conditioning.

The Engineers from US University have created what they are calling the whitest paint yet. Buildings coated with this paint may be able to cool them off enough to reduce the need for air conditioning, the researchers have said.

The team has created an ultra-white paint in October pushing the limits of how white paint can be. This older formulation was made of calcium carbonate, while the new one is made up of barium sulphate, which makes it more white.

The newer paint is whiter and keeps the surface areas it is painted on cooler than the formulation before this could. If this new paint was used to cover a roof area of 1,000 square feet, it may be able to get a cooling power of 10 kilowatts, the team has said. The team has also claimed that this paint may be the closest equivalent to the blackest black paint called “Vantablack” that is able to absorb up to 99.9 per cent of visible light.

A press release issued by Purdue University notes that typical commercial white paint gets warmer rather than cooler and that paints currently available in the market that are designed to reject heat reflect only 80-90 per cent of the sunlight and therefore, they can’t make surfaces cooler than their surroundings.

The paint’s whiteness also means that the paint is the coolest on record. Using high-accuracy temperature reading equipment called thermocouples, the researchers demonstrated outdoors that the paint can keep surfaces 19 degrees Fahrenheit cooler than their ambient surroundings at night. It can also cool surfaces 8 degrees Fahrenheit below their surroundings under strong sunlight during noon hours.

This white paint is the result of six years of research building on attempts going back to the 1970s to develop radiative cooling paint as a feasible alternative to traditional air conditioners.