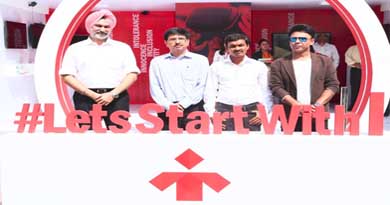 Tomorrow’s India, an initiative of the Global Social (India) Foundation has launched a nationwide campaign – #LetsStartWithI at the heart of Gurugram, Cyber Hub. The major motive of this ongoing campaign is to inspire every individual to contribute to its future by taking a pledge for a better India ahead.

The onset of this campaign was initiated during the initial days of January 2018; however the activation went on-ground from 25th May, 2018 at Cyber Hub, Gurugram with an exclusive Augmented Reality (AR) and Virtual Reality (VR) experience. The activation was ideated to reach out to masses, primarily youth that promoted awareness of three precise concerns in India, also focused on the key issues which the organisation is closely working around –Child Labour, Child Education and Health & Sanitation.

Theatre group ‘Moksh’ who has done more than 1200 plays till date, launched the campaign with a unique street play focusing on the theme ‘Let’s Start With I’. Both RJ Naved and Jaiprakash Chaudhary(who has paved his path by selling items retrieved from garbage worth Rs 11 lakh and also employs about 160 staff in his two waste segregation centres in the national capital),  encouraged the young professionals of Delhi/NCR with their motivational words and stories to pledge for a better tomorrow. Also, for every individual pledge, the organisation donated₹1 on their behalf to Tomorrow’s India charity fund.

Planned from 25th May to 25th September 2018, the initiative aims to reach out to the mass Indians and will request them to take a Pledge individually for shaping India towards a better future. This endeavour of Tomorrow’s India targets at raising awareness about the elimination of the social ills that plagues the nation. Therefore, the contribution of ₹1, put together, will be helpful to work towards their goal – also making individual participation a key instrument for making changes happen.

Spanning a four month period, the activation would travel across numerous colleges, marketplaces and corporate areas in New Delhi/NCR. The next stop will be Adventure Island, Rohini, from 1st June till 4th June followed by other locations in the national capital.

HP Singh, Founder & Chairman, Global Social (India) Foundation said, “India, once named as “The Golden Sparrow”, is a land that has been at the peak of greatness for centuries. With this campaign we urged the youth of India to join hands and help us in creating a better India. Tomorrow’s India is trying to act as the catalyst in leading the great national integration required to fight off the damaging issues. India needs every individual, every identity to come together for its future, for Tomorrow’s India. I am glad that we got a decent response of more than 600 registrations during the first phase of the campaign”.