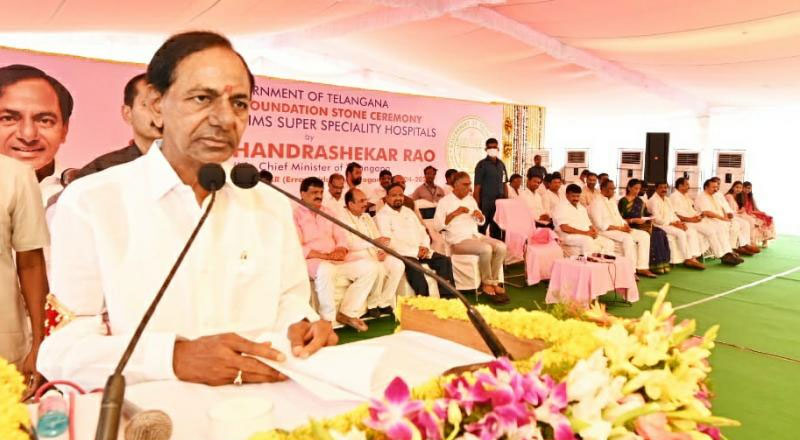 What India requires is not a political front or political realignments with the sole agenda of pulling down the Bharatiya Janata Party (BJP) from the Centre. We don’t require a political agenda, but an alternative people’s agenda that can lead the country toward the path of progress and development. Any new experiment should be based on this philosophy,” KCR said in the inaugural address of the TRS party plenary on the occasion of its 21st year of foundation.

He recalled that the Communist party leaders had sought his help in dislodging the BJP at the Centre. “Some other parties had also raised the issue. I told them we are not ready to accept this trash. The focus is not on bringing down Modi and making some Yellaiah or Mallaiah (Tom, Dick and Harry) as the next Prime Minister,” he said.

The CM hinted at forming a new political party from Hyderabad itself. “There were suggestions to float Bharatiya Rashtra Samithi (BRS). If a new proposal, new agenda and a new philosophy emerges from Hyderabad and spreads to the entire country, it’s a matter of pride for us,” he said.

KCR said the country requires a new agricultural, economic and industrial policy. “For that, we need a right forum. We should grow beyond petty and narrow politics. We need a progressive path for the country and only then, we can visualise a strong nation,” he said.

Stating that the Telangana had emerged as a torchbearer for th country, KCR said, “At a time when several states, including Gujarat are reeling under power crisis, Telangana has been giving round-the-clock power supply to its consumers. India has huge resources, but because of the inefficiency of the rulers, the country is suffering.

KCR said the TRS has the ability to replicate its successful model at the national level.

He said when he had spoken about Telangana in 2000, it raised many an eyebrow. “Yet, we achieved the statehood due to sustained struggle,” he said.

The TRS plenary adopted a resolution declaring that the TRS will play a decisive role in the national politics. “Telangana will certainly provide that leadership to the nation and see that India would get a golden Telangana model, not the bulldozer model,” KCR’s son and TRS working president K T Rama Rao said, while introducing the resolution.

KCR also expressed concern over the growing communal disturbances in the country. “We are seeing how certain people are abusing even the father of nation Mahatma Gandhi, while worshipping his killer,” he said.

He said he was shocked to read about swords and guns being brandished in religious processions in Delhi and wondered which religion or Constitution would allow it. He warned that the politics of hijab and halal will only bring destruction.

“There are 13 crore Indians working abroad and if those countries say you don’t belong to our religion and get out, will this government give them jobs,” he asked.

Lashing out at the central government for failing to tackle falling GDP, shutting down of industries, price rise and several other problems faced by the people. “Instead, the BJP government uses issues like Pulwama attack, surgical strike and even a film like ‘The Kashmir Files’ for political gains,” he criticised.

He recalled that former chief minister of combined Andhra Pradesh N T Rama Rao was dethroned by then governor at the behest of the then Congress government at the Centre, but he had to be reinstated following popular upsurge. “The same governor was sacked unceremoniously later. It should have been a lesson for the Central government, but unfortunately, the present rulers in Delhi have not learnt a lesson,” he said.

Apart from the resolution on TRS role in the national politics, the plenary adopted 12 other resolutions, including demand to bring down spiralling prices of essential commodities, 33% reservation for women in legislative bodies, concern over growing religious intolerance in the country, enumeration of OBCs as part of national census, increase in the quota for SCs, STs and minorities in education and employment, withdrawal of cess on petrol and diesel, condemning the Centre for usurping of powers of the states etc. (MANISH)