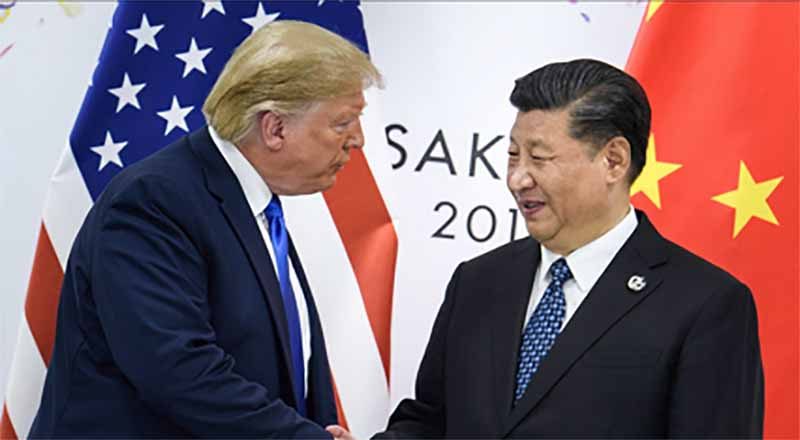 President Trump removed threat of new tariffs as Beijing agreed on Friday to purchases of farm goods, other products, as China and US reach phase one trade deal that includes some tariff relief and agriculture purchases and structural change to intellectual property and technology issues.

Now the world’s two largest economies will now move toward signing as they aim to rein in a boiling trade war, appeared murky. As Chinese officials briefed reporters on the details of the agreement Friday morning, President Donald Trump also announced terms of what he called an “amazing deal.”

The agreement, will open the calls for China to purchase more products from American farmers and other exports, U.S. officials said. In return, the U.S. put the brakes on new tariffs set to take effect Sunday and agreed to reduce some existing levies. Both sides termed it a “phase one” deal and said negotiations would continue on remaining issues.

Trump called the deal “phenomenal” and told reporters in the Oval Office that the U.S. would continue to use the remaining tariffs as leverage in future negotiations with China. “I say affectionately that the farmers are going to have to go out and buy much larger tractors because it means a lot of business, a tremendous amount of business,” The President  Trump said.

But doubts remained, with some critics claiming the deal amounted to little more than China agreeing to step up U.S. farm purchases and not make the kind of long-term economic changes that U.S. officials have said are needed to level the playing field for businesses.

“He has sold out for a temporary and unreliable promise from China to purchase some soybeans,” Senate Democratic leader Chuck Schumer of New York said.

As part of the deal, the U.S. canceled plans to impose fresh tariffs on $156 billion in annual imports of Chinese-made goods—including smartphones, toys and consumer electronics—that were set to go into effect Sunday. The U.S. will also slash the tariff rate in half on roughly $120 billion of goods affected on Sept. 1, from 15% to 7.5%.

U.S. tariffs of 25% would remain on roughly $250 billion in Chinese goods, including machinery, electronics and furniture. In exchange, officials in Washington said China agreed to increase American agricultural purchases by $32 billion over previous levels over the next two years.

That would increase total farm-product purchases to $40 billion a year, with China working to raise it to $50 billion a year, U.S. Trade Representative Robert Lighthizer told reporters at the White House. The farm purchases would be part of total additional exports of $200 billion over two years, said Mr. Lighthizer, who didn’t provide specifics.

Mr. Lighthizer also said China made specific commitments on intellectual property, including counterfeiting, patent and trademark issues and pharmaceutical rights, as well as on preventing the forced transfer of technology from firms entering the Chinese market. He and Chinese Vice Premier Liu He are expected to sign the deal in early January, with the pact entering into force 30 days later, Mr. Lighthizer said.

While he portrayed the first phase as a crucial step, Mr. Lighthizer acknowledged tougher issues lay ahead in future negotiating rounds, including opening up closed Chinese markets, if the U.S. is to achieve a fundamental shift in the trade relationship with China.

Neither government submitted a full text or even a detailed summary of the deal, hamstringing efforts to determine the winners and losers in the world’s two biggest economies or the quality of the agreement.

U.S. stock markets ended the day slightly higher, with some analysts saying they were awaiting more details on the specifics,where the Chinese officials, declining to specify how much China expects to buy from the U.S. as part of the near-term deal, also said the U.S. had agreed to increase its imports of Chinese agricultural products.

The trade war then intensified with both governments hitting each other with fresh tariffs. In recent months, Mr. Trump and Mr. Xi both came under economic and political pressure to ease the trade tensions. Betting on the U.S. president’s need to prop up the economy and markets in the run-up to his re-election bid next year, Mr. Xi’s team proposed what it had sought for a while: carrying out the negotiations in stages.