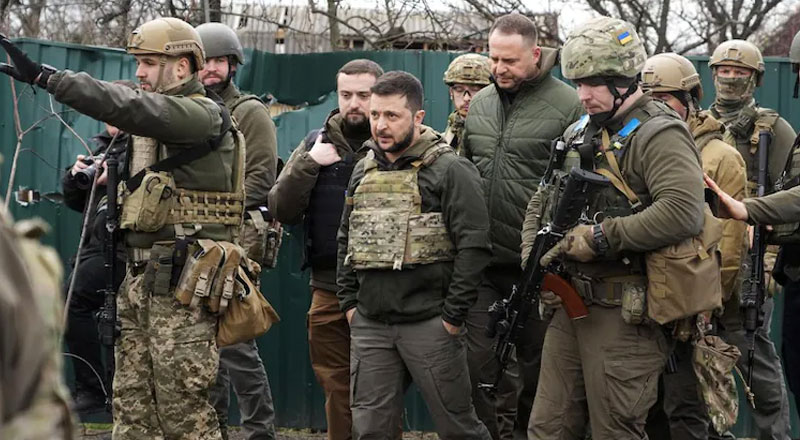 Ukrainian President Volodymyr Zelenskyy has said the fate of Ukraine will be decided in the country’s east and south, after a Russian general outlined Moscow’s aim to take full control of southern Ukraine.

Ukrainian President Volodymyr Zelenskyy has said the fate of Ukraine will be decided in the country’s east and south, even as Russia acknowledged that its goal in the nearly two-month-long war has shifted to occupation of eastern and southern Ukraine.

Izyum direction, Donbas, Azov coast, Mariupol, Kherson Oblast are the places where the fate of this war and the future of our state is being decided now,” said President Volodymyr Zelensky in his daily address on Friday.

In a grim warning to the rest of Europe, Zelenskyy said Russia’s invasion of Ukraine was only the beginning and that Vladimir Putin would eventually direct his troops further west to grab other countries.

“All the nations that, like us, believe in the victory of life over death must fight with us. They must help us, because we are the first in line. And who will come next?” Zelenskyy said.

The embattled Ukrainian leader’s remarks came in the wake of a Russian general saying that the Kremlin aims to take full control of not just eastern Ukraine — where an all-out war for the Donbas region is taking place — but the south too.

Rustam Minnekayev, deputy commander of Russia’s central military district, was quoted by Russian state news agencies as saying full control over southern Ukraine would give it access to Transnistria, a breakaway Russian-occupied part of Moldova in the west

While launching the “special military operation” in Ukraine on February 24, Russian President Vladimir Putin sought to justify the invasion by saying his goal was “to protect the people that are subjected to abuse, genocide from the Kyiv regime” and to “demilitarise and denazify Ukraine.”

In a blistering attack on Moscow, Zelenskyy said the only territory where Russia should protect the rights of Russian speakers is Russia itself. He also slammed Russia as a country where there is “no freedom of speech, no freedom of choice, no right to dissent, where poverty thrives and human life is worthless

Numerous cities and villages have come under bombardment in the Donbas — the industrial region in the east that the Kremlin has declared the new, main theatre of war — as well as in the Kharkiv region just to the west, and in the south, authorities said.

Russian forces rained fire on an estimated 2,000 Ukrainian fighters holed up inside the sprawling Azovstal plant, the last known pocket of resistance in the strategic southern port city of Mariupol. Thousands of civilians are also believed to have taken refuge in the steel plant.