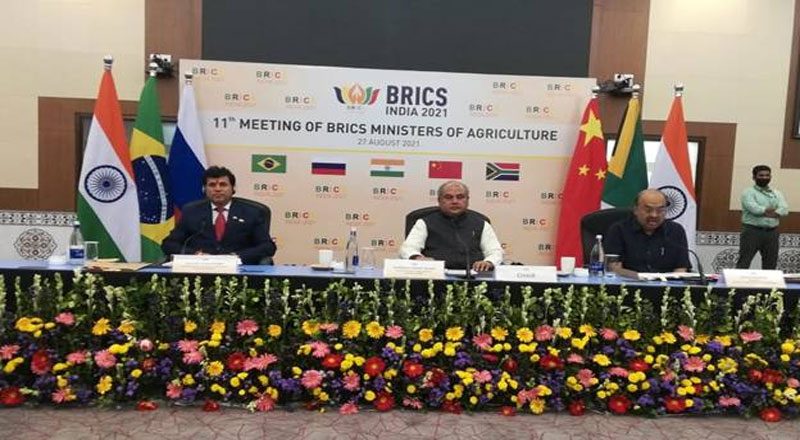 BRICS countries to play a leading role in achieving the 2030 sustainable development goals of eradicating hunger and poverty: Shri Tomar

In his opening remarks, Shri Tomar said that the BRICS countries are well-positioned to take a leading role in helping to achieve the objectives of the 2030 Sustainable Development Goals to eradicate hunger and poverty. By increasing agricultural production and increasing the income of farmers, the problem of income inequality and food price volatility can be overcome.

The Agriculture Minister highlighted the efforts made by India in preserving the agro-biodiversity by establishing and maintaining the National Gene banks for plants, animals, fish, insects and agriculturally important microorganisms at different respective Bureaus. India is actively promoting the diversification of its agri-food systems through countrywide programs such as pulses, oilseeds, horticultural crops, National Bamboo Mission and the recently launched National Palm Oil Mission. The objective of these programs is to increase the income of the farmers along with providing diversification in both farm and plate.

Shri Tomar said that on the initiative and proposal of India, the United Nations has declared the year 2023 as the International Year of Millets and preparations are being made to celebrate the International Year of Millets at the global level. Shri Tomar informed that India is focusing on capacity building in research, teaching, policy-making, trade and farming of nutritious cereals, which will benefit the farmers while conserving the amazing diversity available in this group of crops. Shri Tomar informed that the BRICS Agricultural Research Platform has been created to promote cooperation in agricultural research and innovations and its implementation has been started today.

The strong agricultural research base in BRICS countries and the need to harness and share knowledge, facilitate the transfer of technologies from lab to land to provide improved solutions for enhanced productivity, especially in the face of climate change, maintaining agrobiodiversity and ensuring sustainable use of natural resources was acknowledged.

The Ministers expressed their intention to make the BRICS Agriculture Research Platform developed by India functional and encourage research cooperation to improve the use and application of agricultural technologies for meeting the needs of producers and processors. BRICS Agriculture Research Platform (BARP) will promote cooperation in the areas of agricultural research, extension, technology transfer, training and capacity building.

The Action Plan of 2021-24 for Agricultural Cooperation of BRICS Countries was adopted in the Ministers’ meeting. The Action Plan 2021-2024 provides for enhanced cooperation in the field of agriculture amongst BRICS nations and focuses on the themes of food security, welfare of farmers, conservation of agrobiodiversity, resilience of food and agricultural production systems, promotion of digital agricultural solutions etc. which are integral to the sustainable development of agriculture.