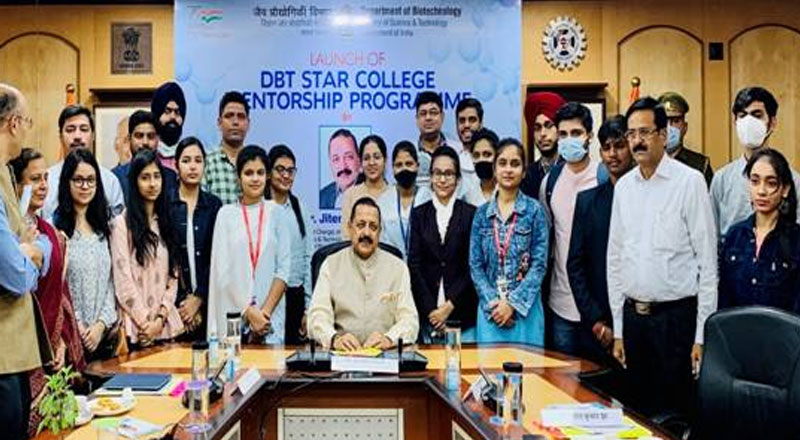 Dr Jitendra Singh said that under Prime Minister Narendra Modi, the Government is taking a number of steps to promote scientific temper among the masses, particularly youngsters, by strengthening scientific research and innovation efforts in the country. He said, this is a pan India Scheme that envisages Star College in every district of the country supported by the Department of Biotechnology.

Dr Jitendra Singh said that the DBT-Star College Mentorship Programme will help towards the concept of networking, hand holding and outreach. The plan envisages organizing workshops, meetings per month; handhold at colleges particularly in the rural areas or lesser endowed areas and conduct outreach activities with government schools. He said, the activities will enable newer colleges which have begun their journey under the scheme to come up as per the mandate of Star college scheme. The Star Status Colleges will help in incorporating the vision of DBT towards strengthening of UG Science Courses throughout the country by mentoring the newer colleges through hand-holding and peer learning and bringing them under the aegis of Star College Scheme, the Minister added.

Addressing the Students, Teachers and Principals at the launch event, Dr.Jitendra Singh informed that the Mentorship Programme by Star Status Colleges under Star College Scheme is in line with the Prime Minister’s Independence Day address wherein he emphasized that the roadmap for the next 25 years will be determined by the scientific and technological innovations and scientific prowess in all walks of life and called upon young scientists to walk the talk. He added that this will be possible only through a very well-articulated Vision, Mission and Goals, driven through a set of well-defined strategies and a clearly laid out implementation Action plan.

Dr Jitendra Singh informed that a total of 278 undergraduate colleges across the country are currently being supported under the DBT Star College Scheme. He said, the categorization of the scheme into urban and rural categories during 2018-19 has ensured a level playing field for applicants hailing from rural and urban areas of the country. He noted with satisfaction that presently 55 colleges from rural areas and 15 colleges in Aspirational districts are being supported under the scheme in a short time period of two years.

Dr Jitendra Singh said that more than 1.5 lakh students were supported in the last five years and also a comprehensive support was provided to colleges participating in the Star College Scheme. He said, this support is not limited to procurement of equipment, but the scheme also supports training of faculty and laboratory staff, lectures by eminent scientists, visits to research institutes and industry etc. This type of holistic support is expected to create enabling environment for students to get motivated and pursue science education, the Minister added.

The Minister asserted that there is a need for focusing on increasing numbers of beneficiaries in human resource related schemes like Star College Scheme, Skill Vigyan Programme(Skill Development Programme) in Biotechnology, Biotech Industrial Training Programme and doctoral & post-doctoral and Re-entry Schemes & Fellowships, and other similar schemes.