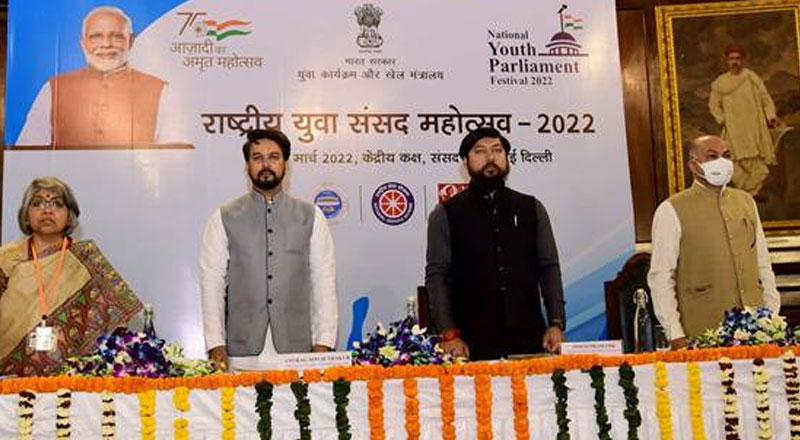 Union Minister for Youth Affairs & Sports Shri Anurag Thakur addressed the inaugural session of National round of 3rd edition of National Youth Parliament Festival (NYPF) 2022 today in the central hall of Parliament, New Delhi. Minister of State of Youth Affairs and Sports Shri Nisith Pramanik also graced the event. Secretary Youth Affairs and Sports, Smt. Sujata Chaturvedi, Secretary General of Rajya Sabha Shri P. C. Mody and other officials of the Ministry and Parliament were also present on this occasion. Speaker of Lok Sabha, Shri Om Birla will address the valedictory function of NYPF on 11th March, 2022. The top three National Winners will also get an opportunity to speak before the Lok Sabha Speaker during the valedictory function.

During his address, Shri Anurag Thakur said, “Theme of this year’s National Youth Parliament Festival is ‘be the voice of New India and find solutions and contribute to Policy’. I urge all of you to focus on championing a cause ranging from solid waste management, eliminating hunger, gender equality, affordable and clean energy, clean water & sanitation. As we mark Azaadi ka Amrit Mahotsav, I also urge you to discuss the progress we have made so far and envisage solutions to transform India when we mark India @ 100 years of independence. What can the youth do in the field of health, sports, media, transportation, infrastructure, foreign affairs that will transform lives for a billion people? What can 1 billion people contribute to the future of humanity and ‘ease of living’?”

Talking about AatmaNirbhar Bharat Shri Thakur said that while the whole world was struggling during the pandemic, India rose to the occasion and we all worked hand in hand to overcome the situation. With this, we set an example before the world that with right vision and leadership, we can face all adversities. The youth must also imbibe this quality and take the country ahead in a spirit of togetherness to achieve wonders for our nation when we turn 100.

The Minister reiterated that it’s the spirit and the participation of the youth through which the foundation of a country is laid, it’s the youth who can take the country and society to a new height, youth are the present of the country as well as they are the bridge between the past and future.

Shri Thakur further added that the Prime Minister Shri Narendra Modi has promoted schemes like Skill India, Khelo India and Fit India which have not only imparted skills to crores of youth but is also laying the foundation of a strong India. The Union Minister also lauded the youth who participated in the various rounds of Youth Parliament and   gave best wishes to all the finalists of the 3rd edition of National Youth Parliament Festival 2022.

Smt. Sujata Chaturvedi said that the objective of the National Youth Parliament is to provide a platform to youth to voice their thoughts opinions and dreams for the country and also to publicize the various schemes and activities of the government to the youth in an attractive interactive platform and to inculcate the spirit of democracy through civic engagement and dialogue.

The National Youth Parliament Festival (NYPF) is organised to hear the voice of the youth, who will join various careers in coming years, including public services. NYPF is based on the idea given by the Prime Minister in his Mann Ki Baat Address on 31st December, 2017. Taking inspiration from the idea, the 1st edition of NYPF was organised from 12th January to 27th February, 2019 with the theme “Be the Voice of New India and Find solutions and Contribute to Policy”. A total of 88,000 youth participated in the program.

2nd edition of NYPF was organized from 23rd December, 2020 to 12th January, 2022 with the theme “YUVAAH- Utsah Naye Bharat Ka” through virtual mode which was witnessed by more than 23 lakh youth and stakeholders across the country at District, State and National level.

3rd edition of NYPF was launched on 14th February 2022 at District level through virtual mode. More than 2.44 lakh youth across the country participated in the District Youth Parliaments followed by State Youth Parliaments through virtual mode from 23rd – 27th February, 2022. Eighty-Seven (87) winners (62 Female and 25 Male) from States/ UTs get an opportunity to be present in the Central Hall of Parliament before the Hon’ble Minister of Youth Affairs & Sports and Hon’ble Minister of State of Youth Affairs & Sports and other dignitaries. Twenty-Nine (29) winners of State Youth Parliament (SYP) get an opportunity to speak before the National Jury comprising of Sh. Bhartruhari Mahtab, Member of Parliament Lok Sabha, Dr. Satya Pal Singh, Member of Parliament Lok Sabha, Smt. Anu J Singh, IRS (Retd.) and Sh. Kanchan Gupta, Senior Adviser M/o Information & Broadcasting today. The top three National Winners will also get an opportunity to speak before the Speaker, Lok Sabha during the valedictory function on 11th March 2022. Certificates and Awards will be given to 3 final winners at the National level (Cash prizes of INR 2,00,000, INR 150,000, INR 100,000) and Rs. 50,000 for 2 consolation prize may also be awarded, if any.