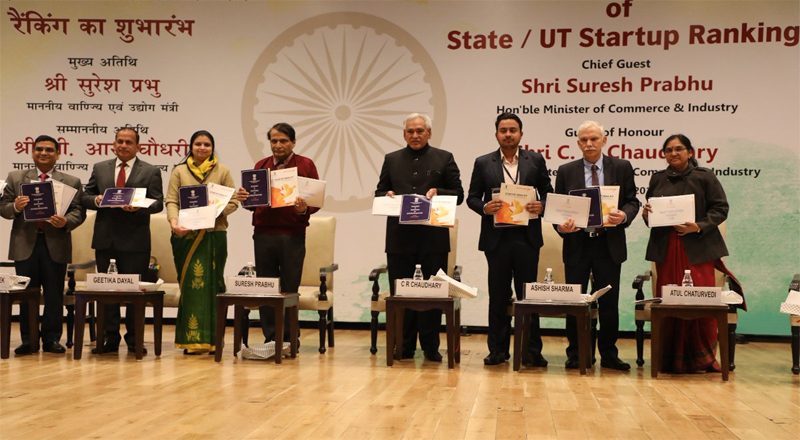 In order to rank the start-ups in the country, three new tools have been launched for States and Union Territories by Union Minister of Commerce and Industry Suresh Prabhu at a function today in New Delhi.

The tools are: the State and Union Territory Start-up Ranking Framework, the Compendium of Good Practices for Promoting Start-ups in India and the Start-up India Kit. These will act as catalysts to help the Start-up India initiative to drive India’s economic growth.

India is home to about 20,000 start-ups, with about 1,400 beginning operations every year. They are not only driving economic growth but also leading to technological innovations and employment generation in every state. Entrepreneurs are introducing new solutions everyday and also improving existing processes. To encourage and help start-ups, the Government of India has taken the lead in creating policies and a framework. 18 States and UTs have a start-up-focussed environment with ease-of-doing business for start-ups.

The State and UT Ranking Framework is based on the feedback collected from start-up ecosystem stakeholders, which include start-ups, mentors, investors, accelerators, incubators and the government bodies. Areas which should be given greater thrust like seed funding support, women entrepreneurship are given more score.

The parameter of this feedback focusses on all the actions and initiatives undertaken by states on or before March 2018. These include having a start-up cell or helpline and a mobile or web portal for queries, the size of the start-up mentor network created by the state government and the number of key incubators for incubation support to start-ups. The Start-up India Hub portal will provide a platform for the launch of the Ranking Framework.

The official release of the Start-up India Compendium of Good Practises for promoting start-ups in India focusses on enriching the start-up ecosystem through ethical behaviours and is currently followed by 18 States and UTs. It covers 95 good practises across 7 areas of intervention. These are distilled into 38 action points including Incubation Support, Seed Funding, Angel & Venture Funding, Start-up Policy & Implementation, Simplified Regulations, Easing Public Procurement, Awareness and Outreach.