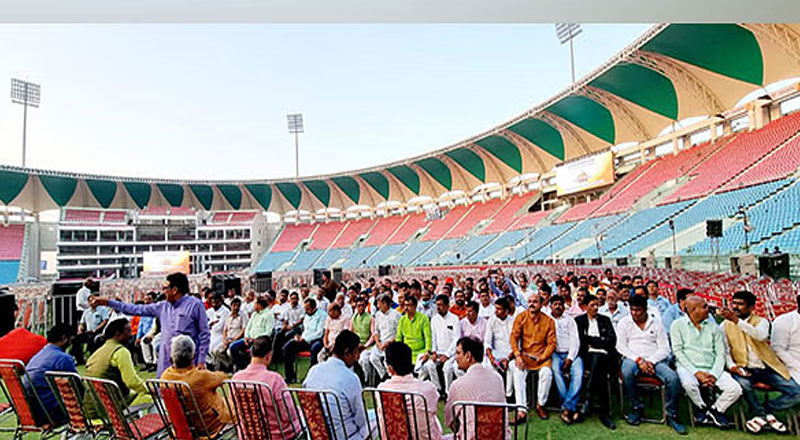 A grand stage has been set up with a slogan on its poster ‘New UP of New India (Naye Bharat ka Naya UP)’ at the Bharat Ratna Shri Atal Bihari Vajpayee Ekana Cricket Stadium for the swearing-in ceremony that is scheduled to take place on March 25.

According to sources, around 85 thousand people will be attending the grand ceremony in Lucknow.

After inspecting the arrangements, the BJP state president held a meeting with BJP members and state authorities at the stadium.

Singh also held a meeting with city president Mukesh Sharma and other Lucknow BJP leaders and reviewed their preparation for the grand ceremony. Praveen Garg said to ANI, that during the meeting in the stadium Police
Commissioner DK Thakur, District Magistrate Abhishek Prakash, and Ajay Kumar Dwivedi from Municipal Corporation also briefed the BJP president on the preparations done by their respective departments.

Singh went through the entire plan and blueprint of the grand oath-taking event in Lucknow. Yogi Adityanath will take oath as chief minister for a second term in Lucknow on March 25.
As per sources, the discussion on the Cabinet Ministers is still underway between the senior leadership of the party.
Adityanath will be the first Chief Minister in the last 37 years to return to power after completing a full term in the state.
The BJP retained power in Uttar Pradesh by winning 255 out of 403 constituencies, securing a 41.29 per cent vote share. manish